NRMA makes announcement on Australian petrol prices: ‘First time it has ever happened’

Australian drivers will have to pay more than $2 a litre for petrol as long as Russia’s war on Ukraine continues, the NRMA believes.

Spokesman Peter Khoury says the price drivers are paying at the bowser is unprecedented.

“In Australia, most capital cities by the end of this week or early next week will see two dollars a litre on average,” he told AAP on Wednesday.

“That’s the first time it has ever happened. There’s really no end in sight.

“We’re struggling to be able to point to any factors globally that will provide any sort of short-term relief.”

The sizeable jump of Brent Crude to nearly $US130 ($A179) a barrel comes after US President Joe Biden announced overnight the banning of Russian oil and gas imports in what he termed as a “blow to (Vladimir) Putin’s war machine”.

Russia, the second-largest exporter of oil globally, has threatened to push prices up to $US300 ($A414) a barrel by cutting supplies to Europe in retaliation for sanctions levelled against it.

Prices at Australian petrol stations hovered around the $1.80 per litre mark before the February 25 invasion but have spiked to around $2.

“We have no control over this,” Mr Khoury said. 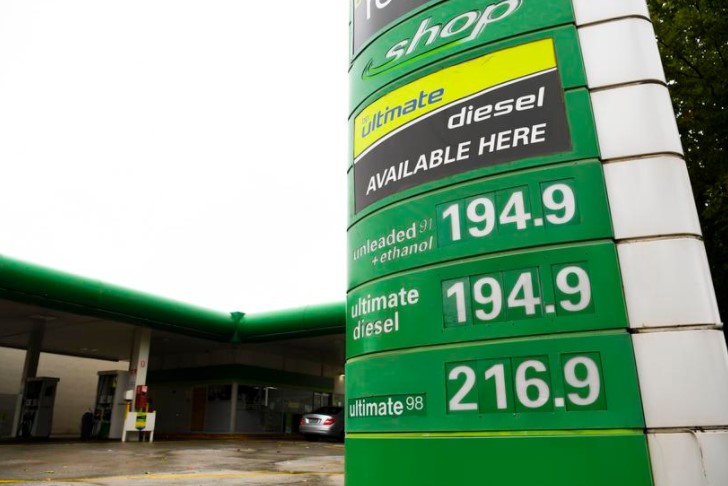 Fuel prices are seen at a BP petrol station in Canberra on Tuesday. Credit: Lukas Coch/AAP

He noted Australia, a significant oil producer and exporter, relies heavily on imports even though they do not come directly from Russia.

More than half of Australia’s refined products come from South Korea and Singapore, according to Shipping Australia – the peak industry body for shipping.

“The latest Russian invasion of Ukraine has just escalated the increases to a whole new level.

“They (prices) have gone up about $69 a barrel this year alone,” Mr Khoury said.

Roberto Aguilera, an energy economist from Curtin University’s Oil and Gas Innovation Centre, says “much of the price rise … can be explained by fears of escalating conflict, sanctions and oil disruptions”.

Even though the US had taken the lead in sanctioning Russia, “many countries are reluctant to sanction Russian oil directly – for fear of harming consumers further through higher prices”.

However, there might be a silver lining “despite the near-term price pain for drivers”, he said.

“New oil production is still expected within the first half of the year. This should help bring crude and fuel prices down.”

Mr Khoury said the immediate impacts would be felt as long as the conflict in Ukraine dragged on.

“Unfortunately as long as Russia continues its aggressive war against Ukraine and with the impacts of sanctions as a result of that, these prices are going to be hanging around for a while”.

Extracted in full from: Cheapest petrol near me: NRMA makes announcement about prices in Australia | 7NEWS