The well is dry at a Christchurch petrol station as queues have formed across the country after motorists were warned of a price hike.

Waitomo Cranford in St Albans, Christchurch ran out of all petrol by Friday evening, a Waitomo Group spokesperson said.

“We’ve had really high demand… We’ve never seen anything like this before,” she said. 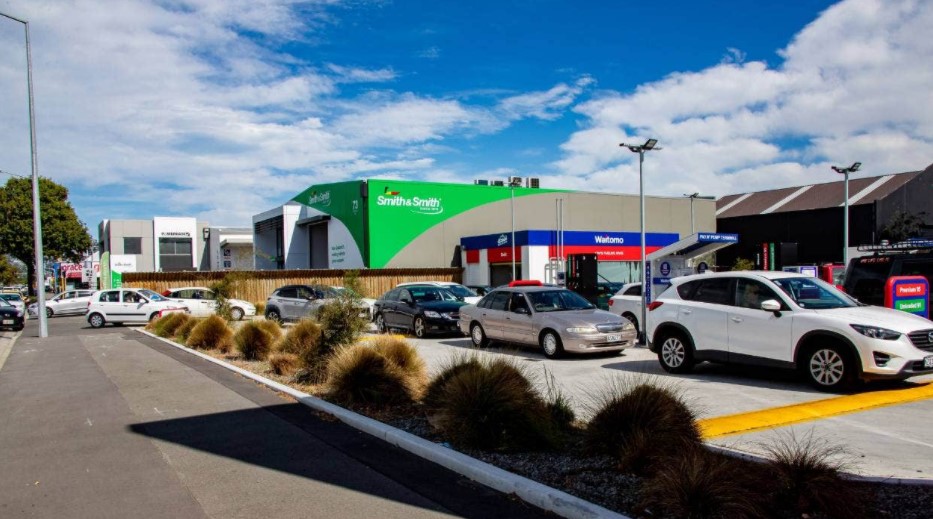 The price of 91 was $2.69 a litre at Waitomo Fitzgerald in Christchurch.

The petrol stations would be topped up later on Friday evening but “we just can’t get deliveries fast enough”, she said.

The rush on fuel came after Waitomo Group managing director Jimmy Ormsby said the company had been advised by its supplier that prices would increase on Friday evening.

With the biggest single jump in our wholesale price seen in my time.

“A jump of this level is going to hurt motorists and businesses big time.” 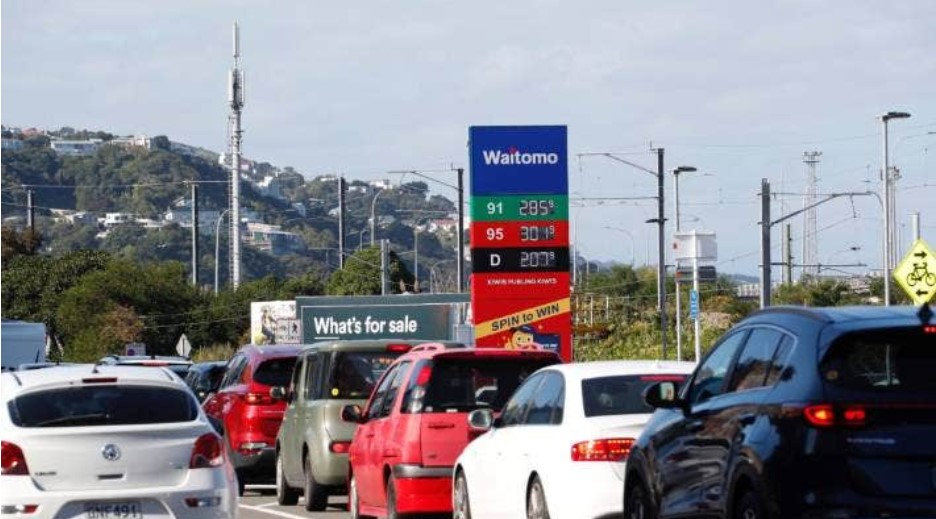 Queues at a Waitomo petrol station in Wellington before they raise prices at 6pm.

The queues that have formed following the announcement from Waitomo shows how worried people are about events at the moment, following from Covid, issues with logistics chains, and the significant increases at the pump that kiwi motorists have seen over the last few months.

Gareth Chaplin of the Institute of Economic Research, said it wasn’t surprising that there had been a rush of buying after Waitomo’s statement.

He said it wasn’t clear if the move was a marketing gimmick, but Waitomo was “probably as surprised by the reaction as everybody else”.

“While this certainly won’t hurt Waitomo’s brand visibility, their market position or their sales for the month, the cost of petrol is definitely going up, and this is a real thing for everybody.”

Petrol prices topped $3.50 in most parts of the country this week, but were expected to increase up to 30 cents for diesel and 20 cents for petrol.

Petrol stations in the North Shore, Christchurch and Palmerston North had queues as people tried to beat the price hikes.

The price of 91 was $2.69 a litre at Waitomo Fitzgerald in Christchurch. A queue of cars extended down Fitzgerald Ave.

Stuff reporter Stephanie Ockhuysen was in such a rush to get fuel she left home without shutting her front door. She waited in a half an hour-long queue of about 20 cars at New Plymouth’s NPD.

“I was shocked to turn up and see the amount of cars in the queue,” she said.

“A lot of people gave up and drove off. I was on my orange light so thought I better fill up now before the price of fuel bankrupts me.”

The petrol station had two entrances and there were queues at both, which she described as chaotic.

People had been seen cutting into the queues causing arguments, she said. 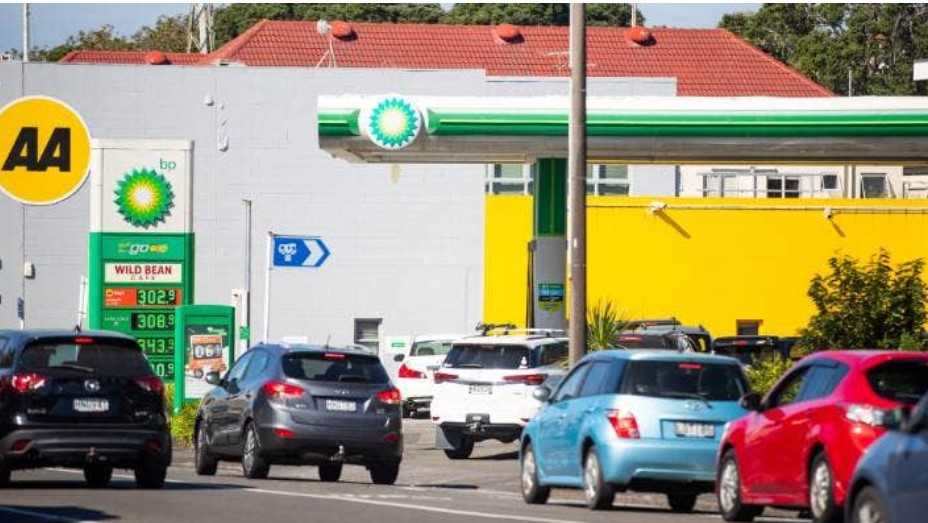 BP on New Plymouth’s Powderham Street had queues onto the road.

BP on New Plymouth’s Powderham St has cars queued on the street, while in Timaru, NPD had lines of cars waiting to fill up.

Ormsby said continued uncertainty over the Ukraine crisis and the ban on Russian fuel by the US and the UK had reverberated across the market, leading to crude oil prices rising to levels not seen since 2008.

A Z Energy spokesman agreed the Russian invasion of Ukraine continued to create volatility on the international markets for refined fuels, which had led to further rises.

“Based on this global situation, Z can confirm that it has increased the price of fuel across all grades as it is no longer able to absorb the significant international price pressures.” 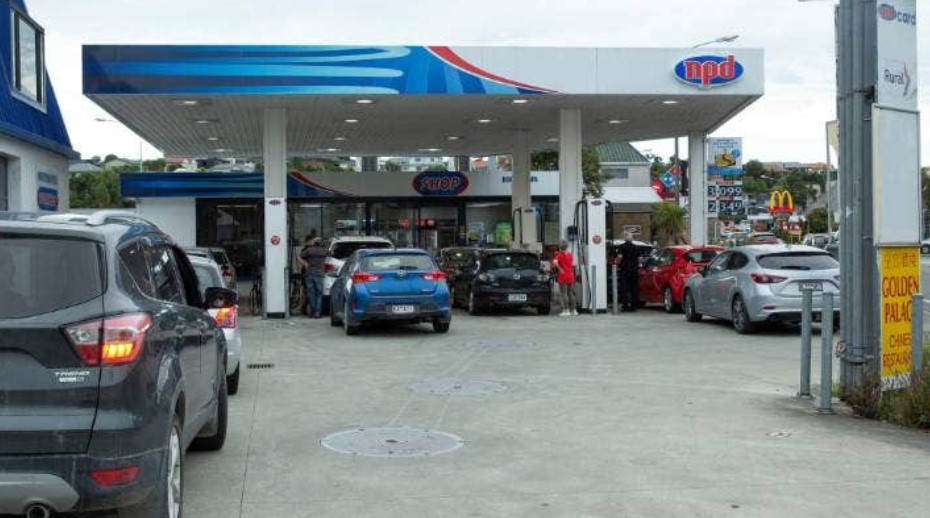 Service stations in Timaru full of people after the announcement of the increase in fuel.

A BP spokesman said it could not speculate on prices.

“There are a number of factors that influence prices. We review BP Connect prices every day to ensure competitiveness in the market,” he said. 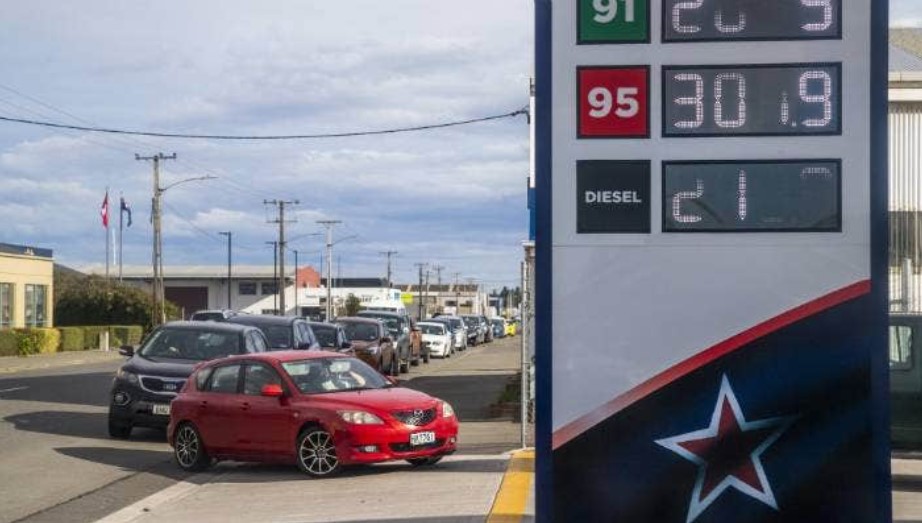 There were massive lines at the gas station on Bond St in Invercargill.

In line in Invercargill

Late on Friday in Invercargill there was the unusual sight of a queue stretching down Bond St as motorists fuelled up at an Allied 24/7 station.

The queues took up enough of the street there was a police officer on hand to keep an eye on proceedings from a distance.

All customers spoken to raised concerns about petrol prices increasing in the coming days, and they were prepared to queue up to get their tanks filled up before that happened. All were worried about what impact the prices increases would have on them.

Invercargill man Dinodh Perera said his father told him he needed to go and get his car filled up before further increase which he did on Friday afternoon.

Despite the queues stretching down the street Perera said he hadn’t had to wait long to get to the front of the queue.

Finance Minister Grant Robertson said on Thursday it was “not the end of the road” for petrol and diesel price hikes.

“I can’t give you a specific dollar term, but it’s quite clear petrol prices will continue to rise while the impacts of the Russian invasion are felt,” he said. 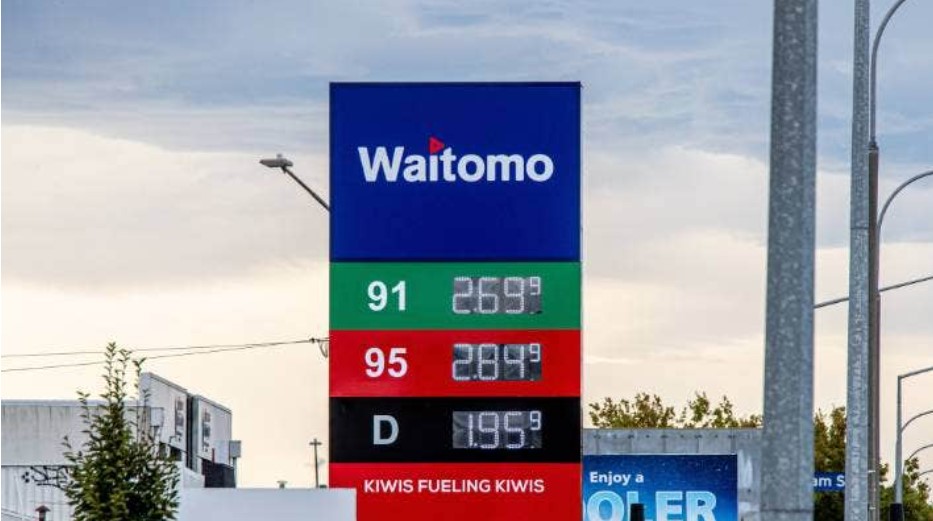 But the Government had not yet considered temporarily removing the fuel tax.

AA motoring policy principal adviser Terry Collins said Waitomo had created a demand through their announcement, but couldn’t comment on whether what it claimed was correct.

“I do expect prices will go up, I don’t think they’re lying. But wether it’s a cunning ploy to get product through quickly, I don’t know,” he said.

But it’s like saying Briscoes is going to put the prices of their toasters up and everybody thinks every toaster on the planet is going to go up.”

While prices remained “highly volatile”, there were steps drivers could take to alleviate the costs, Collins said.

The biggest saver was to “sign up for every possible discount card you can get from Waitomo to Gull to BP to Z, everybody”.

Another source of information is the mobile app, Gaspy, which allows users to select their region and fuel type to find the cheapest.

Other ways to conserve fuel included driving smoothly without too much braking or accelerating, limiting air conditioner use and ensuring tyres were inflated, he said.

Extracted in full from: Petrol station runs dry of fuel as queues form throughout the country, drivers warned of price hike | Stuff.co.nz