Motorists in the outback NSW town of Broken Hill swarmed service stations over the weekend to buy up some of the cheapest fuel seen in years.

An impromptu price war between two stations saw the $2-per-litre for petrol drop to as low as $1.30 and the price of diesel plummet to just 55 cents.

“We just kept it for one day, just for a promotion, as a bit of friendly competition,” Argent Street service station owner Priyanshu Reddy said.

The two stations served more than 2,000 motorists – more than 12 per cent of Broken Hill’s population – in less than 18 hours and by the end of the filling frenzy the bowsers had run dry.

“All of a sudden the other servo started matching the price and I called our head office and they told me I could lower our price by two cents so we just kept going down down down until we sold out. 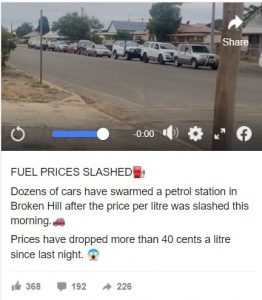 The two businesses took turns lowering their prices two cents at a time and observers posted the drops on social media.

The Beryl Street service station had sold out of diesel by sunset and petrol by nine o’clock the following morning.

The Royal Automobile Association, which has kept records of petrol prices across the South Australian and Broken Hill council areas since 2008, said records were broken.

“When you consider that 43 cents of that is going to the government as tax, you’ll go broke selling fuel at that price.”

Mr Borlace said it was refreshing to see price matching among petrol stations in a regional area.

“It’s good that there’s competition happening in the regional cities … they’ve long suffered from a lack of competition,” he said.

“I’d say those prices were probably the cheapest in Australia at the time, but those are not sustainable prices, they’re losing a lot of money.”

“Sometimes it’s about reminding people that they’re there … getting a bit of market share to get their volumes up, or it can be a part of awareness strategy to get attention,” he said.

Mr Borlace said the action in Broken Hill showed how much strain the fuel price hike was putting on Australians.

“It shows how critical fuel is in the household budget,” he said.

“So whenever people can get it at those sorts of prices and take some pressure off the house, they’re going to join the queue.”