“While the December Quarter seems a distant memory in the wake of the current oil and fuel price volatility, the report provides some very interesting insights with respect to the nature of the market recovery following the reopening of the NSW and Victorian economies after a sustained period of COVID lockdowns”, said ACAPMA CEO Mark McKenzie.

The report revealed that there was a substantial post-covid rebound in sales volumes during the December 2021 Quarter in both states with NSW surging 43% higher than the previous quarter and Victorian 27% higher.

Small increases in quarterly retail volumes were also observed in South Australia (8%), Queensland (5%) and Western Australia, likely due to a combination of relaxed borders and increased domestic travel in lieu of international and interstate travel.

Interestingly, retail volumes in the Northern Territory fell by 13% compared with the September 2021 Quarter.

“We also used our extensive fuel industry data to investigate the validity of some of the more common beliefs about petrol prices in a quarter that was characterised by a sustained increase in average fuel prices”, said Nick Ferris (Commercial Manager for Asia Pacific, Informed Sources).

This report includes an analysis of regional versus capital petrol prices – given the often commonly-held belief that regional prices are always higher than those in capital cities. The analysis revealed that while comparison of the average price over the period may support this belief, NSW Regional prices were lower than Capital City prices for more days during the December 2021 Quarter (see below). 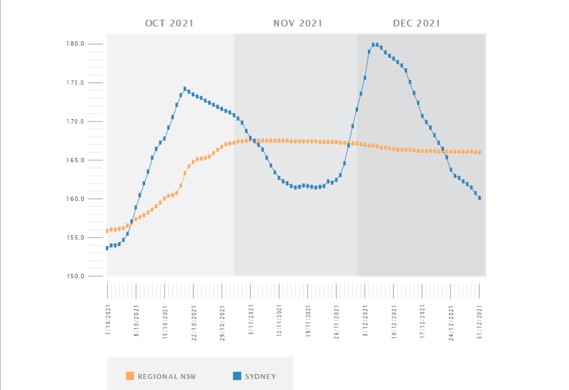 “Another interesting observation was the fact that, despite a sustained increased in average petrol prices during the quarter, volume increases in the premium grades of petrol – 95RON (up 28%) and 98 Ron (up 31%) – were substantially higher than for the lower-priced regular unleaded petrol (up 21% ) during the quarter”, said Nick.

“A comparison of canopy brands with the prior September 2021 Quarter reveals that the majority of the roll-out of the AMPOL branding (formerly Caltex Australia sites) appears to be nearing completion and United Petroleum’s ASTRON brand is also appearing in the market”, concluded Mark.

A full copy of the report can be downloaded at: https://acapma.com.au/news/#single/0