No one likes paying A$1.80 per litre for petrol. But amid forecasts of prices climbing to $2.10 as Russian’s invasion of Ukraine drags on, it’s possible some good could come of that pain — including greater energy independence and a faster path to net zero emissions.

Estimates of the price elasticity of demand for petrol prepared by Paul Burke of the Australian National University and Shuhei Nishitateno of Kwansei Gakuin University in Japan come up with the number 0.3. Other estimates are higher.

A price elasticity of 0.3 means that for each 10 per cent a price climbs, demand for the product falls 3 per cent.

In the case of petrol, where the price has climbed a phenomenal 50 per cent in the past 14 months, demand for it should fall 15 per cent, a fall big enough to make a dent in Australia’s greenhouse gas emissions.

There’s been nothing like such a drop, and what drop there has been can be explained by COVID measures such as lockdowns and working from home.

The high price needs to last to have an effect

There hasn’t been a big drop because the elasticity estimates are long term. Those of us who drive cars don’t (and often can’t) react straight away.

Sure, we can delay filling up if the price is high, or drive from one station to another, but in the short term we have no choice but to buy petrol. 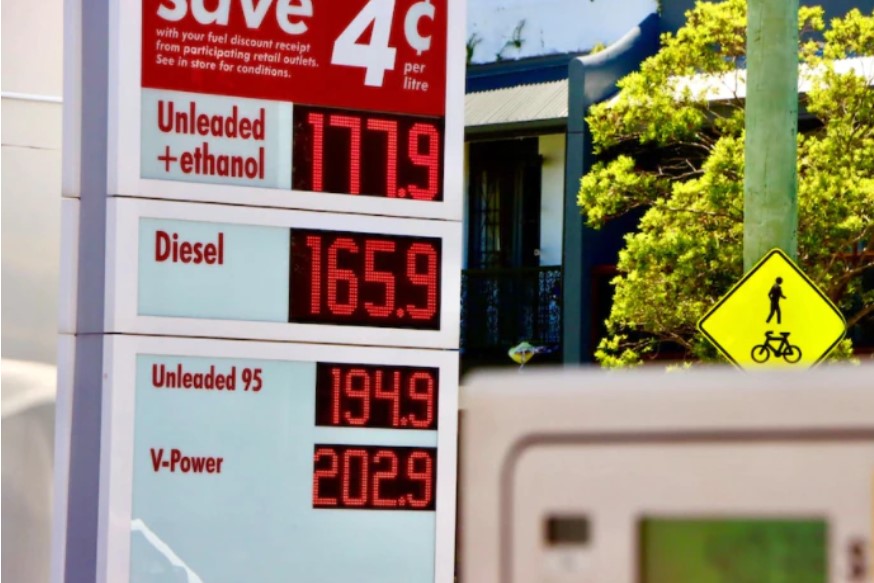 Australians spend almost as much on alcohol as we do on petrol but we notice petrol prices more.(ABC News)

Longer term, we think the price is going to stay high, we will change our behaviour. Burke and Nishitateno’s calculations suggest that each 10 per cent increase in the price of petrol that lasts boosts the average fuel efficiency of new cars by 2 per cent.

It’s an average figure. Some of us will go electric altogether, and be freed of petrol bills, others will do nothing, and others will buy smaller cars or hybrids.

Petrol prices change what we buy

This is how things have played out. When prices shot up in the 1970s we switched to smaller cars, most of which weren’t made in Australia, and helped trigger the decline of the Australian car industry. When prices fell after a spike around 2008 we moved to gas-guzzling SUVs.

So what will matter for our demand for petrol (and our emissions) is whether the higher prices last. There’s no doubt we are paying attention.

We spend almost as much on alcohol (2.2 per cent of our budgets) as we do on petrol (2.6 per cent) but we notice petrol prices more. In part this because they are displayed prominently in well-lit letters of a regulated height.

As marketing researcher David Chalke put it, “you have to buy it, and there’s a bloody great big sign always there telling you how much it is”.

In the 1970s and early 1980s, Australia was fairly self-sufficient in petrol. There was a lot of oil in the Bass Strait and Australia refined it locally.

Then the wells ran low. These days 60 per cent of our petrol is imported and most of the 40 per cent that is made here is made from imported oil.

Russia is one the big three suppliers

It means our prices move with international prices, which are determined by how much is needed (COVID and the rise of China have big effects) and how much is supplied.

Supply is partly determined by big oil exporting nations that get together and strike agreements with the aim of keeping prices high, but not so high that buyers buy less. The biggest are Saudi Arabia (17 per cent of exported crude oil), Russia (11 per cent) and Iraq (7.7 per cent).

From time to time they break these agreements, as Russia seemed to in 2009 when it sent far more oil into the market than was expected and helped bring about the biggest price collapse on record, pushing down the price from US$140 per barrel to US$40 per barrel, and helping usher in the era of the SUV.