Scott Morrison has signalled further measures to counter the rising cost of living, potentially including temporary petrol excise cuts, as the Coalition mulls federal implications from the Liberal loss in South Australia.

The prime minister travelled to Brisbane on Monday campaigning on the commonwealth’s $667m investment in the south-east Queensland city deal, primarily for transport projects, ahead of the federal budget on 29 March.

For weeks, the Morrison government has been signalling possible action on petrol prices and targeted cash payments for low- and middle-income earners as ways to combat the rising cost of living.

In SA, Labor’s Peter Malinauskas defeated the first term Liberal government with a 7% swing by campaigning on health funding and cost-of-living pressures.

The victory is the first loss in Australia of an incumbent government since the onset of the Covid-19 pandemic, leading to warnings that Morrison had damaged the Liberal brand in the state, and that a bigger agenda for the next term of government could trump pandemic management in voters’ minds.

Morrison told reporters in Brisbane the government was “very conscious of cost-of-living impacts, particularly at the moment, with the war in Ukraine and the impact that that is especially having on fuel prices”.

He argued high fuel prices, which have hit $2.20 in some parts of Australia, “don’t just hit the economy and hit family budgets when they fill up, but they have a knock-on effect across the economy”.

“We’ve been carefully considering our response to ensure that we can deliver a budget that both addresses those immediate needs but also ensures that we continue on with our strong economic plan for a stronger economy.”

Earlier, Morrison told 4BC radio that the spike in petrol prices “won’t go forever” and the government would not engage in a “kneejerk” response, suggesting that any move to reduce excise, which adds 44.2 cents to the price of petrol, would be temporary.

Mark Butler, the federal Labor health spokesperson and a senior South Australian in Anthony Albanese’s shadow ministry, said that Malinauskas, like federal Labor, had “been very busy preparing a focused policy agenda that would look beyond the pandemic”. 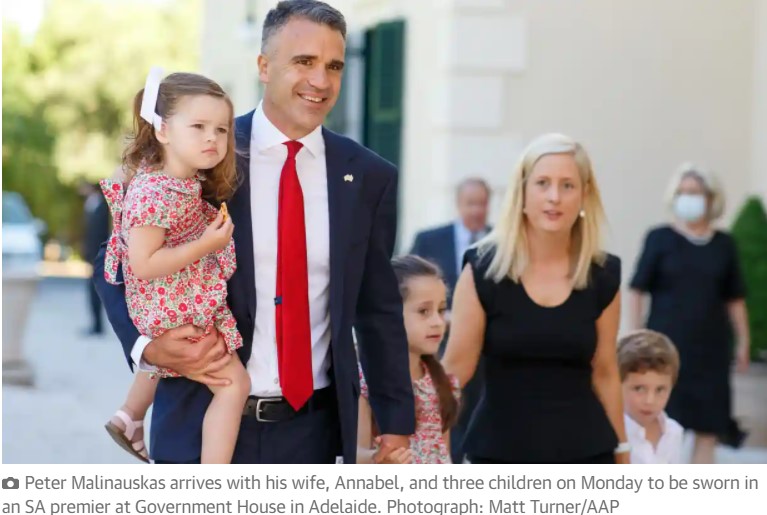 Butler said that defeated premier, Stephen Marshall, and the federal Liberals “consistently pat themselves on the back about the state of the economy”.

“Talking to the economic reality of Australia today is a strong lesson out of the South Australian election,” he said, in addition to a focus on healthcare.

Butler said Labor research revealed one in two voters were less likely to vote for Marshall when they learned he was from the same party as Morrison.

He noted reports that the New South Wales Liberals also want the prime minister to keep a low profile in their seats in the federal campaign.

On Sunday Labor’s national president, Wayne Swan, said the SA election result should have Morrison’s Coalition “trembling” ahead of the federal poll.

On Monday Morrison appeared alongside Queensland premier, Annastacia Palaszczuk, to spruik the $1.8bn city deal between the federal, state and local governments.

The deal includes a $450m investment in the Gabba Brisbane metro station for upgrades to support the 2032 Brisbane Olympic and Paralympic Games.

On Sunday the Grattan Institute released a report finding that both major parties had targeted their election spending promises at marginal seats and just one of the 71 Coalition transport promises worth $100m or more was based on a business case approved by Infrastructure Australia.

Morrison insisted that “every electorate in every part of the country obviously matters”.

“The city deals are developed as a partnership,” he said. “So the priorities for the projects are worked up between the parties.”