Petrol stations are promising to pass on the full savings from a fuel-excise cut to be unveiled in Tuesday’s federal budget, but some sites may be holding nearly a week’s worth of higher-excise fuel and will be unable to drop prices immediately.

Prime Minister Scott Morrison and Treasurer Josh Frydenberg have agreed on a temporary reduction in fuel excise – a 44¢-a-litre tax for road building and maintenance – in a bid to combat cost-of-living pressures. The expected 10¢ to 20¢ cut is tipped to save motorists around $5 at the bowser when filling a 50-litre tank of petrol.

The Australasian Convenience and Petroleum Marketers Association, an industry group representing the majority of the nation’s service stations, said retailers were likely to pass on savings to customers to stay competitive.

“The way we compete is on price and we do that very transparently,” said chief executive Mark McKenzie, whose membership spans about three-quarters of Australia’s petrol station sites.

However, Mr McKenzie cautioned that motorists should not expect all service stations to lower prices immediately because many retailers had already bought up to six days of fuel at the current excise level.

A spokesman for fuel giant BP said any change in the excise that might be announced in the budget would be considered in “any future pricing decisions”.

The expected excise reduction comes as Australian motorists have been facing record-high unleaded petrol prices above $2.20 a litre after crude oil shot past the $US100-a-barrel mark for the first time since 2014.

Oil prices, which were already marching higher due to global supplies failing to keep pace with rebounding post-coronavirus pandemic demand, have been driven up further by rolling sanctions placed on Russia, which accounts for about 11 per cent of the world’s oil supply, since it invaded Ukraine. The United States and United Kingdom among others have announced bans on the importation of Russian oil cargoes in a bid to starve Moscow of the revenue it needs to fund the war.

Mr McKenzie said higher prices had been discouraging motorists from filling up with premium fuel products, with more customers opting for 95 premium octane fuel rather than 98. Customers were also buying fewer convenience items such as drinks and snacks at service stations. 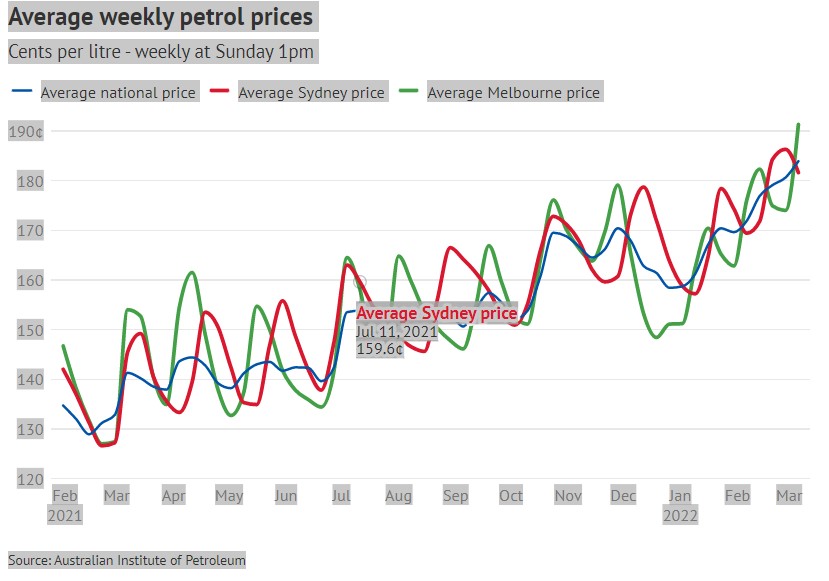 “We think the revenue should be used to fund road infrastructure,” NRMA spokesman Peter Khoury said.

“Whatever the price cut ends up at, the volatility of the oil market means another price spike could eat up the fuel excise cut, and the public don’t get the relief they are hoping for.”

Curtin University energy economist Roberto Aguilera said the huge swings in commodity prices since Russia’s attack on Ukraine meant it was impossible to predict whether the oil price would rise or fall over coming months.

“There is so much uncertainty about the future disruption to supply due to possible sanctions on Russian exports, or if Russia will decide to withhold supply, or if the conflict will escalate,” Dr Aguilera said.

“My view is, though, that there could be downward pressure on prices later on this year,” he added, citing plans from the Organisation of Petroleum Exporting Countries and North American oil producers to boost production volumes.

markMarion Terrill, of the Grattan Institute think tank, said a temporary cut to the fuel excise was “poor policy” and a “crude instrument” to address voters’ cost-of-living concerns.

“If the government really believed it was a good idea to cut fuel excise it would do it permanently. And it could do that and hand over the responsibility to the states to impose taxes on driving,” she said.