A driver’s jaw just about fell off her face over the weekend when she saw the eye-watering cost of fuel – and surprisingly, it wasn’t because of how expensive it was.

She arrived at the bowser at the St Andrews Metro, southwest of Sydney, expecting to pay nearly double what she was used to, due to the recent extreme petrol price hikes.

But instead of paying over $2 per litre for Premium Unleaded, she paid just 22.9 cents.

Gobsmacked at the incredible bargain, with premium fuel currently averaging about $2.20 per litre, the excited driver wasted no time in filling up her car.

For just $10, she put 43.65 litres in before racing home hoping to do the same for her husband.

Taking to a Facebook group afterwards, she shared her incredible luck.

“Just thought I’d share my good fortune this weekend, never in my lifetime has petrol been so cheap.”

By the time she arrived back at the fuel station with her husband’s car however, staff had adjusted the price.

They fixed it by the time I went back with my husband’s car,” she wrote.

More than 100 people were equally as shocked at the woman’s amazing find.

“Someone definitely got in big trouble for that,” one respondent remarked.

“That would’ve been a great start to the day. I’m jealous as hell,” another said.

“Good for you, just sad more people couldn’t get the bargain,” someone else wrote 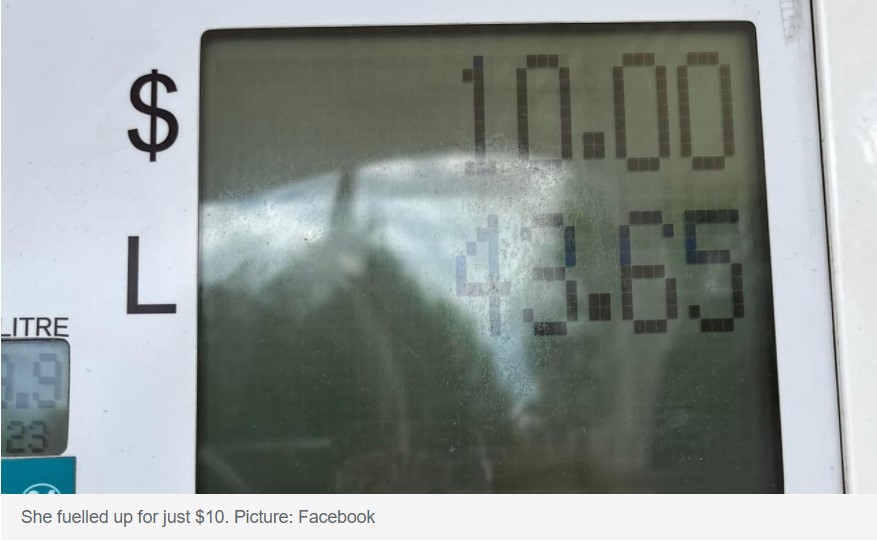 The driver said the premium petrol was advertised for $2.29 on the roadside sign, confirming staff accidentally left a zero out on the bowser.

Someone else commented to report they once scored unleaded 91 petrol for 12.7 cents a litre, and shared a photo of the bowser for proof.

One person was unimpressed by the stunt and accused the driver of being dishonest.

“I feel like if you know it’s a mistake you’re stealing, and [it’s] kind of shameful you didn’t honestly say there’s an error at the pump,” they wrote.

Everyone else disagreed, with many agreeing “it’s their error not ours to fix, they had one job”.