Aussies are spending more than ever on fuel. With prices over $2 a litre in every corner of the country, and over $3 in some places, the financial hit is real.

Hybrid vehicles, e-bikes and working from home are nice, but they haven’t stopped Australia from consuming an enormous amount of fuel in 2022. As the next graph shows, if you take away aviation fuel, our vehicles and machines are consuming fuel much the same as ever, and diesel sales are growing strongly. 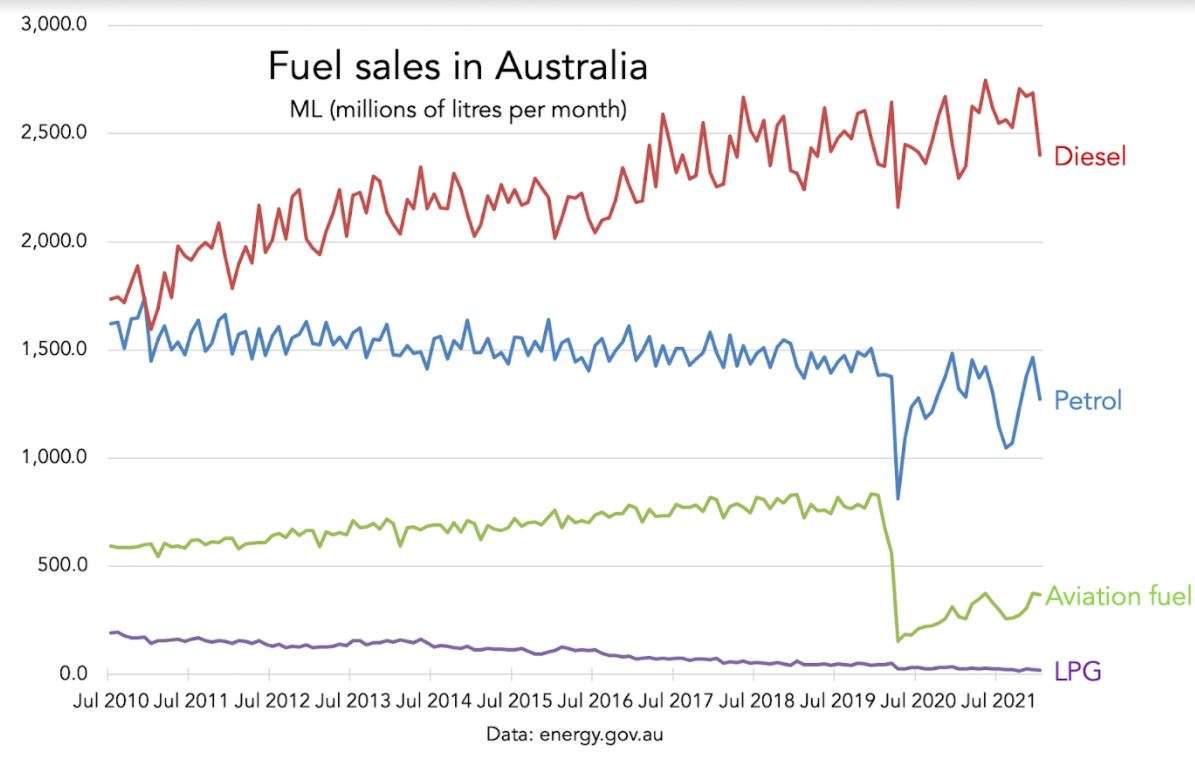 When you add up all the different types of fuel, we consumed 4,287 million litres of fuel in January alone (including fuel used in industrial purposes). That is 172 litres per person – for every adult and child in the whole country. And January is a holiday month. You can see fuel sales dropping off in the graph above. In December we consumed 192 litres per person. 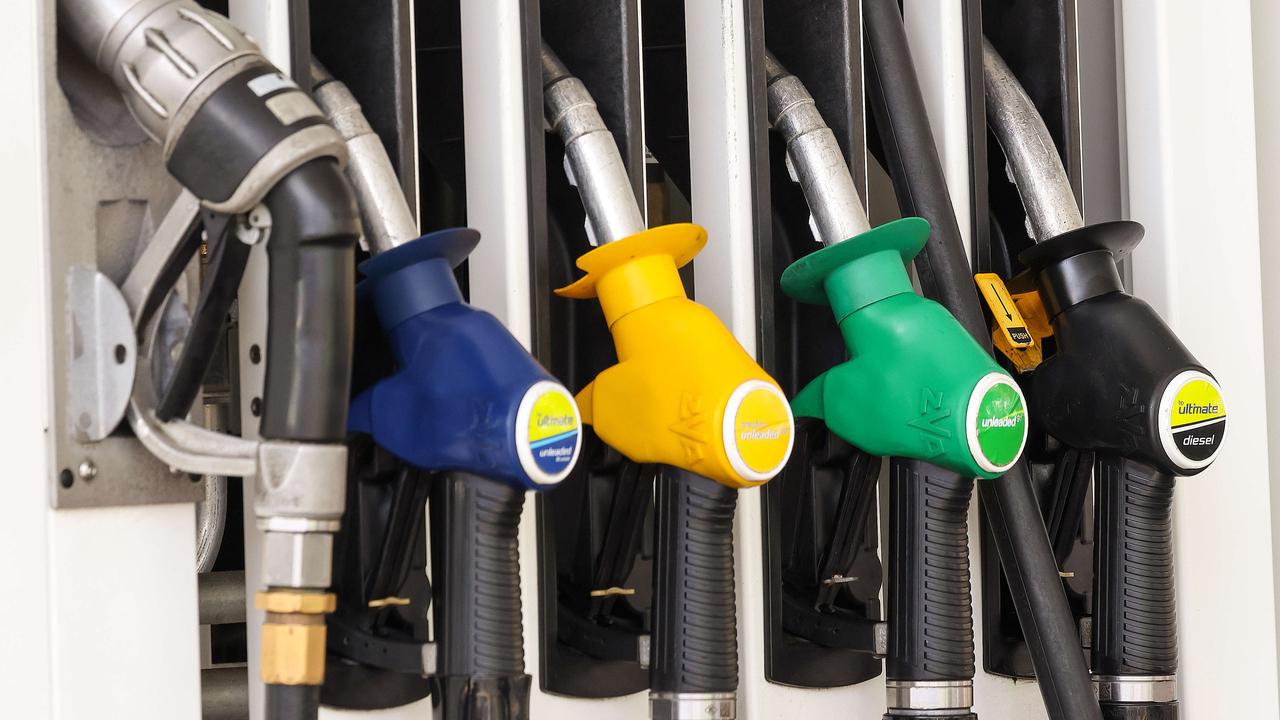 When fuel prices suddenly rise by more than one-third – from around $1.60 a litre in December last year to over $2 a litre now, it whacks family budgets. It’s not always possible to stop driving when you need to use your car to get to work, to drop kids at school and to finally live a little now Covid restrictions are ended.

But how big is the whack? How much does the petrol price rise hurt family budgets?

Part of the answer depend on where you live. Petrol prices are highest in Hobart, Brisbane and Adelaide, as the next chart shows.

In Perth, Canberra and Darwin, the situation is still very unpleasant but not quite so bad as it could be. Sydney and Melbourne are in the middle. 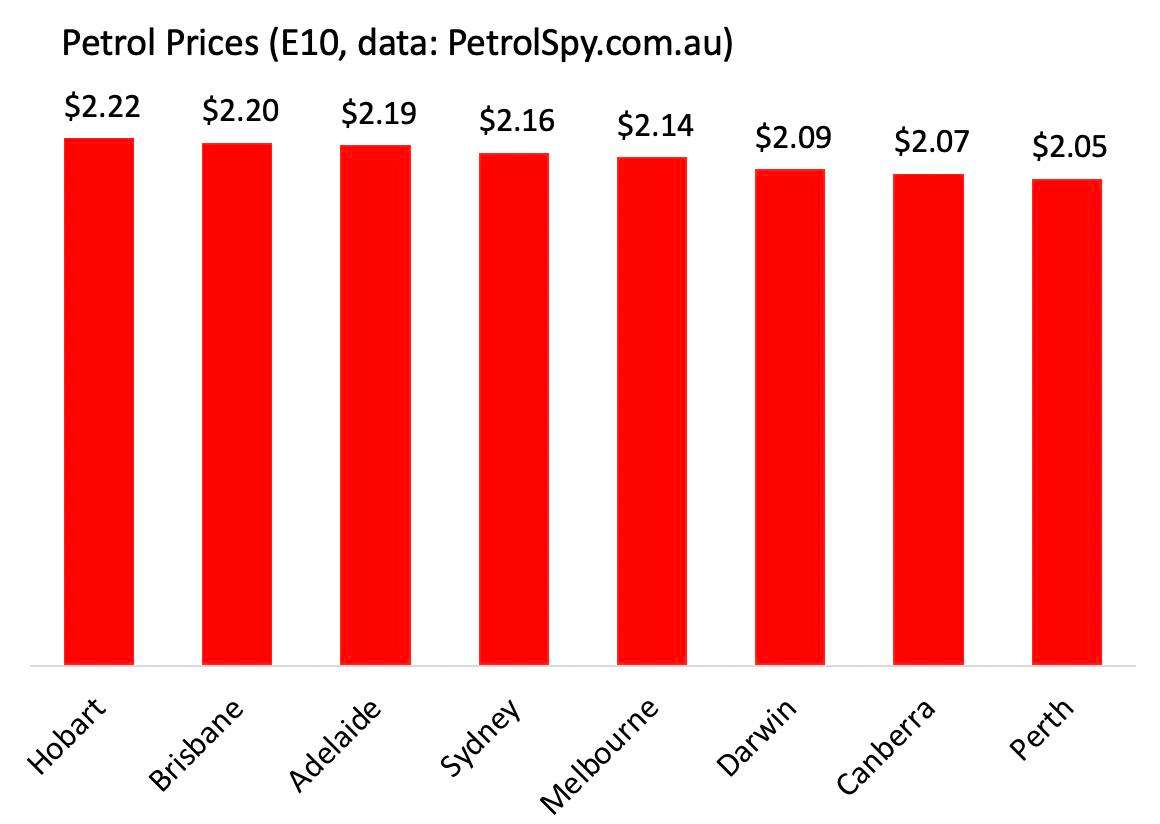 However the biggest factor that determines how much fuel we buy is the type of household we are in. As the charts shows, households with adult kids spend the most on fuel, and households with a lone retiree in them spend the least. If you’re a family in Brisbane or Hobart with a long commute or a thirsty car, your petrol price whack is probably one of the biggest in the country.

As the next chart shows, the most recent data available is from 2015-16, when petrol prices were $1.22 a litre. Since then petrol prices have almost doubled, so to figure out how much you’re spending now, double the numbers and then subtract a little bit. 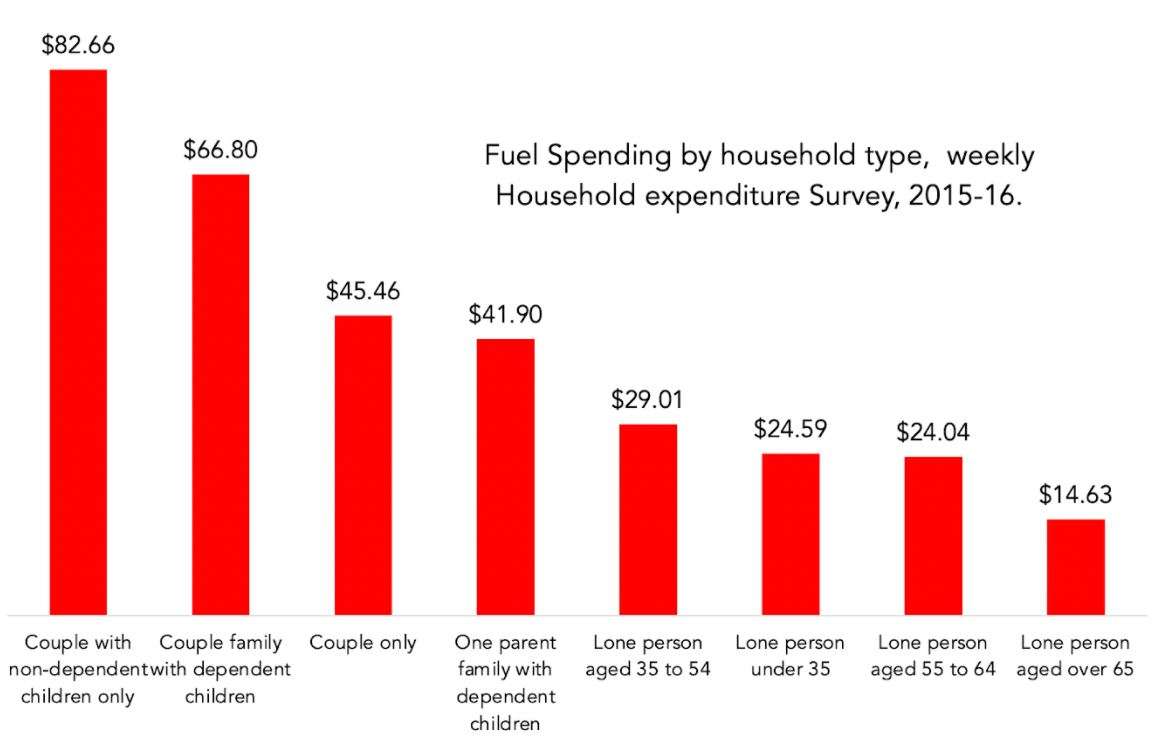 Families with kids in particular are getting hit hard.

• Families with non-dependent children are at the top because the kids are probably driving themselves and may be paying for their own fuel. They were spending $82.66 in 2015-16 and are probably spending around $150 a week now. 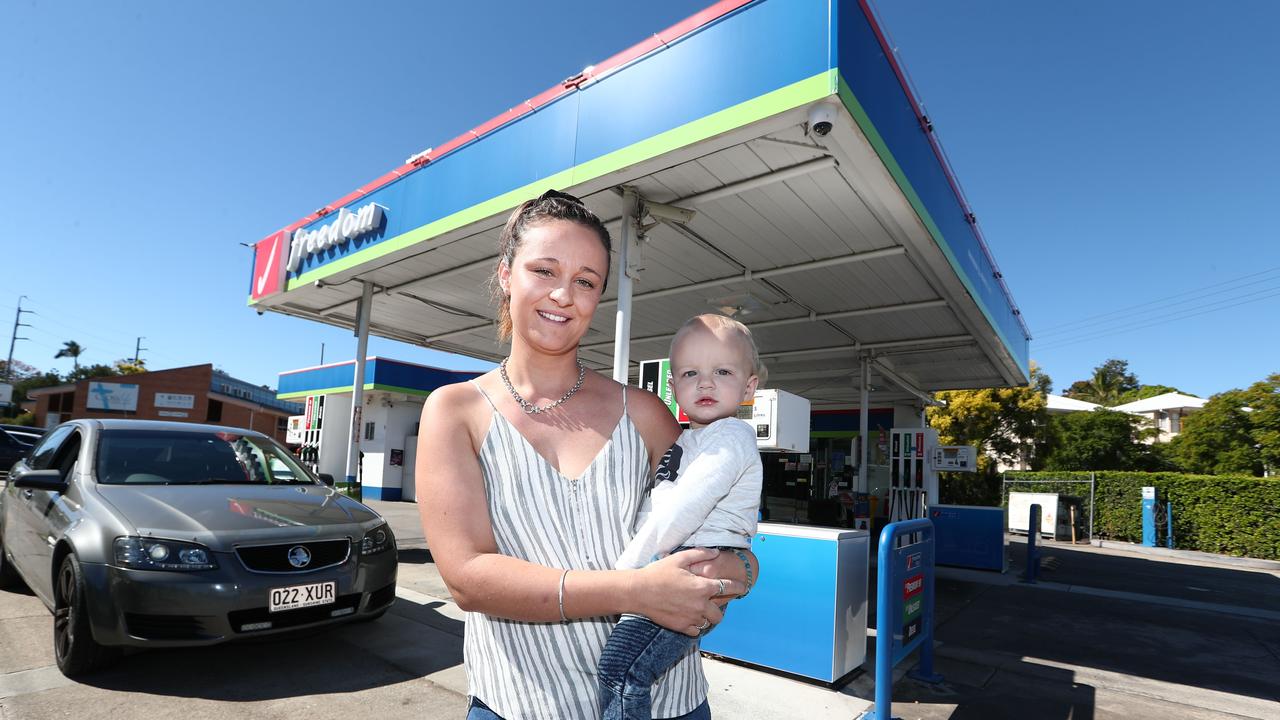 • I feel especially bad for one-parent families. They spent $42 a week in 2015-16 and are probably sending about $75 or 80 now. That’s almost as much as a couple on fuel, even though they have half the earning power and far more school runs to do.

For lone retirees, meanwhile, fuel is a relatively small expense. In fact, retirees spent more on rego and insurance than fuel each week in 2015-16. That fact should remind us of some important context – fuel is not the most expensive part of travel.

When you equalise the weekly cost out, most households spent more on the car itself than the fuel in 2015-16, as the next chart shows. I bet many households still do – I see plenty of big new LandCruisers and shiny Porsche Cayennes driving round out there! 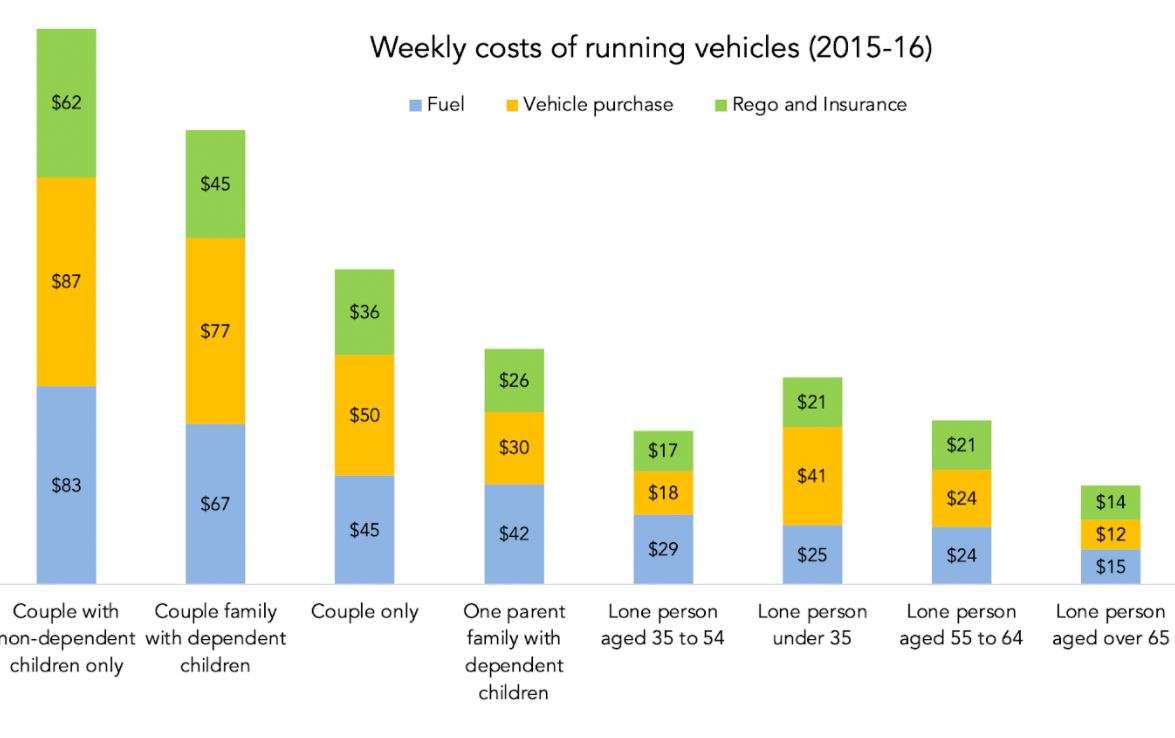 What’s so infuriating about fuel prices – even for Porsche drivers – is they change unpredictably. Nobody was planning for Vladimir Putin to invade Ukraine when they bought their car. The top two colours in the above chart will not have changed nearly as much since 2015-16 as the blue bar representing fuel costs.

Where the money goes

So what happens to all that money when we pay so much for fuel? I’ve got bad news for you. It doesn’t go to workers who dig for oil or the servo franchise owner, who at least lives locally. Instead it goes to the big oil companies. When the oil price goes up it makes very little difference to the cost Exxon Mobil faces to pump oil out of the ground – they break even at US$41 a barrel and anything above that is a bonus. 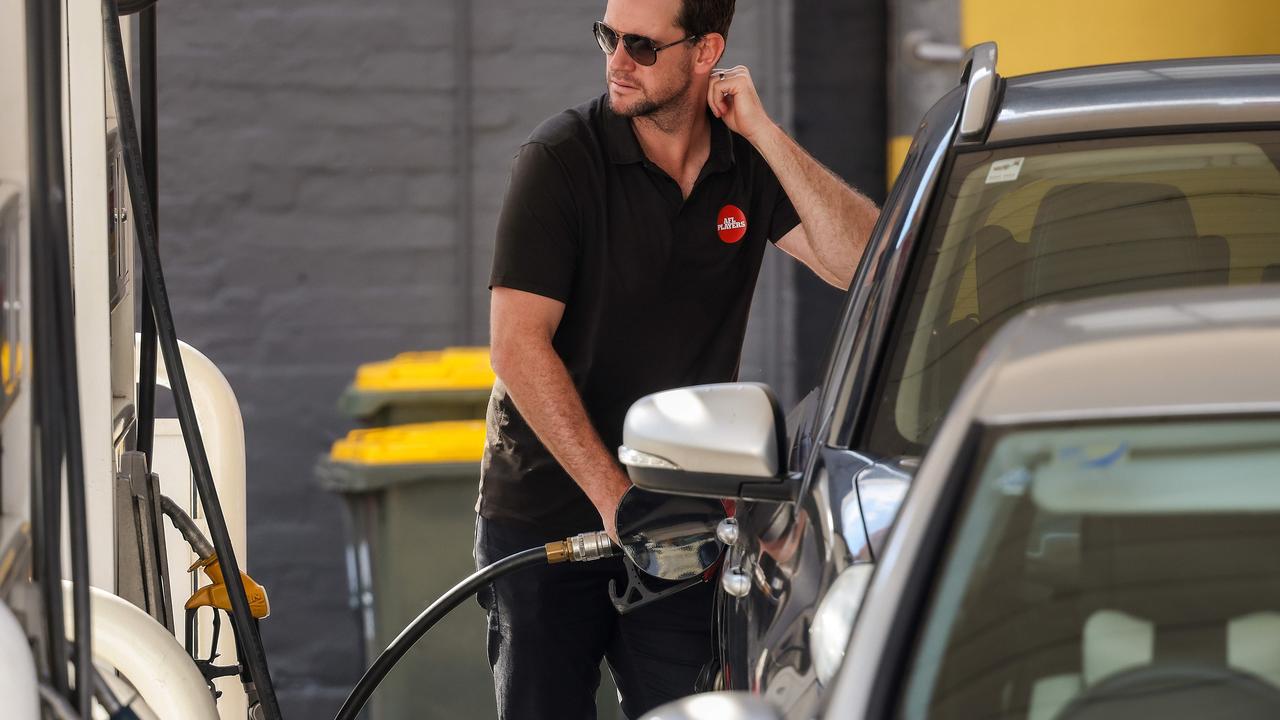 All the money that you pay for fuel is not lining the pockets of those who dig for oil or the servo franchise owner, it goes to the big oil companies. Picture: Ian Currie.

So a higher oil price rapidly increases oil company profits. The oil price is US$100 a barrel right now. Even before it got that high, back in 2021, Exxon Mobil doubled profits from $10 billion in 2019 to $20 billion. 2022 looks like it will be better than their wildest dreams. No wonder their share price is up 40 per cent in the last year.

Now, I’m just using Exxon Mobil as one example here. Their profits are public because the company is listed on the New York Stock Exchange. There are bigger oil companies in the world making even bigger profits. For example Saudi Aramco, which is owned by Saudi Arabia. They have a supposed cost of extraction of under $3 a barrel, so when the oil prices is over $100, as they make $97 on every barrel. No wonder the Saudi Royal Family is so rich.

So next time you’re at the pump, watching the numbers spin up faster than ever before, think of the people who get your money – oil company investors and the Saudi Royal family. At least they’re enjoying this.

At the moment diesel still costs less than petrol. That’s good news for more families in NT and Queensland, where retail diesel sales are similar to retail petrol sales. As the next graph shows, Petrol sales are highest relative to Diesel sales in states with lower incomes and less outback, like Tasmania and Victoria. In wealthy states where a new Ford Ranger is easy to buy and states with lots of outback, petrol is still the dominant fuel but only just.

Extracted in full from: Why are fuel prices so high? | news.com.au — Australia’s leading news site