On Tuesday, Viva Energy announced plans to launch a $43.3m ‘New Energies Service Station’ project set to be located at the entrance of the Geelong refinery by 2023.

The service station, which will be the first of its kind in Australia, is hoped to play a critical role in reducing diesel emissions in heavy transport vehicles.

Chief executive officer Scott Wyatt said he was delighted to demonstrate the important role hydrogen would play in what he hoped would be the beginning of a network of hydrogen-refuelling outlets on key transport routes up the east coast of Australia.

“This project puts hydrogen-powered vehicles on the road to prove their value in day-to-day commercial operations while reducing the carbon footprint of the heavy vehicle transport we rely on every day,” he said.

Chairman of Viva Energy and former Environmental Minster Robert Hill said in this instance “Australia was not behind the rest of the world”.

“I don’t think it’s over the top to call this is a historic day,” he said.

The project which sits at the intersection of emerging energy and transportation will be funded by the federal government, through the Australian Renewable Energy Agency (ARENA), providing $22.8 million to build the hydrogen cell refuelling station.

A further $1m has been contributed by the state government via the Renewable Hydrogen Commercialisation Pathways Fund.

The project is set to incorporate a 2-megawatt electrolyser for the generation of green hydrogen using recycled water from Barwon Water’s Northern Water Plant. 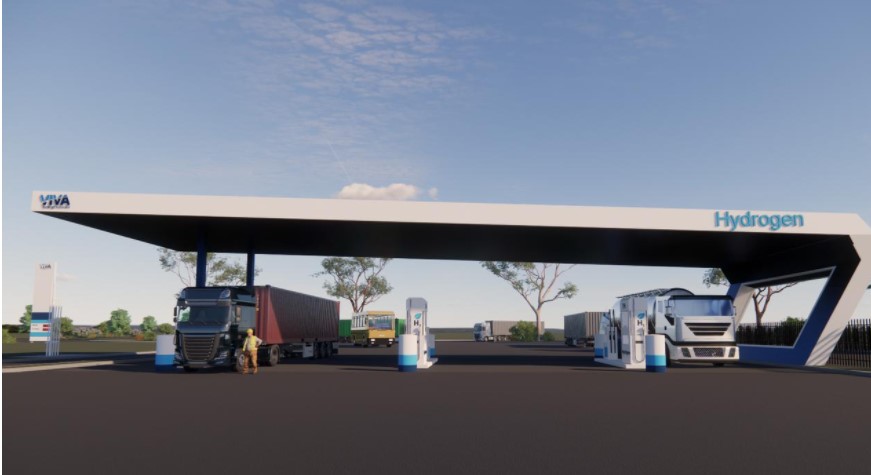 Viva Energy also confirmed it was moving ahead with plans to build a solar energy farm at the refinery to further diversify the site and transition to a future focused “energy hub”.

The solar farm will generate between 15-20 megawatts of renewable energy meeting up to 10 per cent of the Geelong Refinery’s electricity needs, while wind power already generates around one third of its annual electricity requirements.

The projects will help Viva Energy work towards its goal of net zero carbon emissions across the business by 2050.