Australians are finally seeing some relief at the petrol pump – but how much depends entirely on where you live.

Australians should be noticing long-awaited relief at the petrol bowser, the consumer watchdog says, after the fuel excise was slashed in last week’s budget.

The ACCC on Wednesday said that, depending on where you lived, petrol fell as much as 35 cents per litre between March 29 and April 5.

Sydney, Melbourne and Brisbane motorists should have seen between a 25 and 27 cents per litre dip in the same time period. 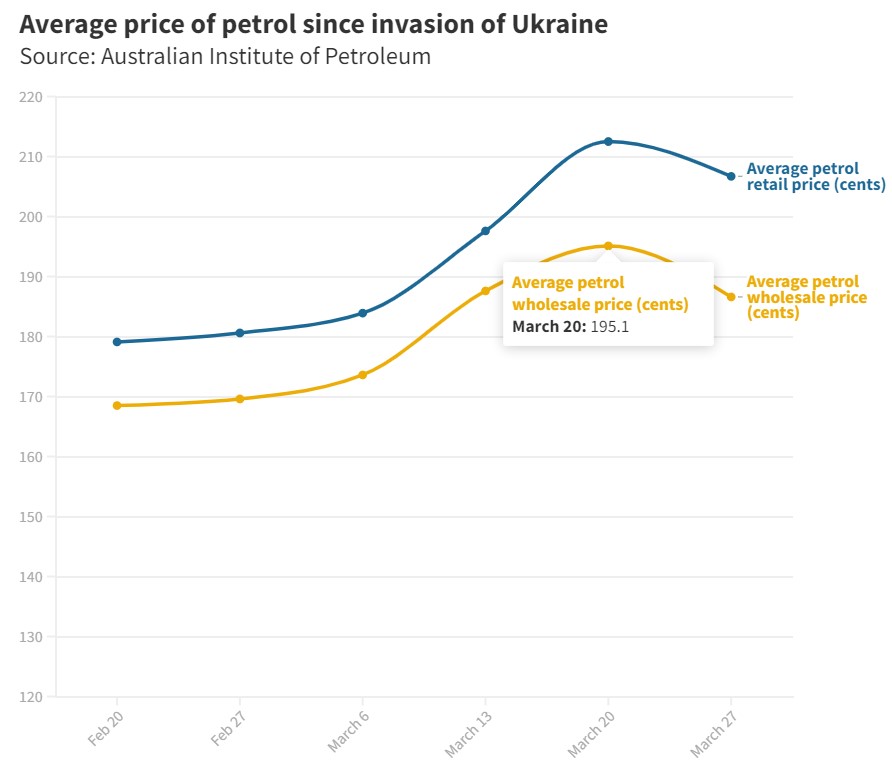 “Over the next weeks, as petrol stations use up their stocks of fuel on which the higher excise had already been paid, we expect the reduced wholesale price to be passed through at the bowser everywhere,” ACCC Chair Gina Cass-Gottlieb said.

“Despite the various factors impacting the fuel price, our analysis indicates that clearly a major part of the reduction in excise has already been passed through in the major capital cities.”

The tax, usually 44.2 cents per litre, was slashed in half from midnight last Tuesday.

“This cut in fuel excise, which takes effect from midnight tonight, will flow through to the bowser over the next two weeks,” Treasurer Josh Frydenberg said in his budget speech.

“The competition watchdog will monitor retailers to make sure these savings are passed on in full.

“This temporary reduction in fuel excise will not come at a cost to road funding, which will see more than $12 billion spent in the coming year.”

Diesel is also beginning to drop in cost, the ACCC, but not as quickly or significantly as petrol.

“It will take some time for petrol stations with lower turnover to use up existing stocks of petrol and diesel, and restock with fuel at the reduced wholesale price that takes account of the excise cut,” Cass-Gottlieb said.

The price of petrol was rising in the lead-up to the war in Ukraine, but skyrocketed once the conflict began.

The average price of petrol on February 20, four days before the invasion of Ukraine, was 179.1 cents per litre, according to the Australian Institute of Petroleum.

Addressing that issue and the rising cost of living were key measures in Frydenberg’s budget last week.