As a doctor regularly treating patients suffering the ill effects of floods, heat and bushfires, Dr Akhil Gupta is eager not to contribute to climate change himself.

But the 34-year-old is devastated after being forced to dump his electric vehicle for an old petrol car because the apartment block where he lives refused to allow him to use a power point in the garage to charge it, despite his offer to pay for the electricity.

“It meant I was having to drive around Sydney to find a charger somewhere else and then sit in it for up to an hour, as my EV was a few years old, to fully recharge the battery,” said Dr Gupta, who lives in an apartment in Darlinghurst.

“It added such a huge amount of time onto my commute to the hospitals I work in, and my 10-hour working day, and it seemed ridiculous when there was a perfectly good working power point in our garage where I could charge up the car overnight. But when the strata sealed it up to stop anyone having access to it, I had no choice.”

Dr Gupta, an endocrinologist and obstetric physician, had offered to pay a weekly fee to the Owners Corporation for the electricity – about $10 a week – or to pay for his exact use if a meter was installed.

The building manager contacted him, however, and said the strata insisted that he, a tenant, had to persuade the owner of his unit to pay for independent legal advice to draw up a by-law and then put it to a meeting of all owners to see if it would be passed.

“We’d have had to hire a solicitor at our own cost to propose something that would benefit the whole building,” said Dr Gupta, who eventually felt compelled to get rid of his 2018 Hyundai IONIQ and bought an old Mercedes-Benz instead.

“It would involve so much money and time and work, but we’d have to bear that despite the likelihood that there’d be many more EVs there in the future. It seemed such backward thinking.”

Luke Bowen, managing director of Sky Living Strata, which looks after the 15-storey, 120-unit Parkridge Apartments on Oxford Street, said he would not go into detail about the case.

“But we can’t allow one individual to use the power as the whole building would be paying for it,” said Mr Bowen. “And an owners’ corporation can’t invoice one individual to pay. He’s been told that a by-law would have to be drafted to allow access to common power and proposed at a general meeting.” 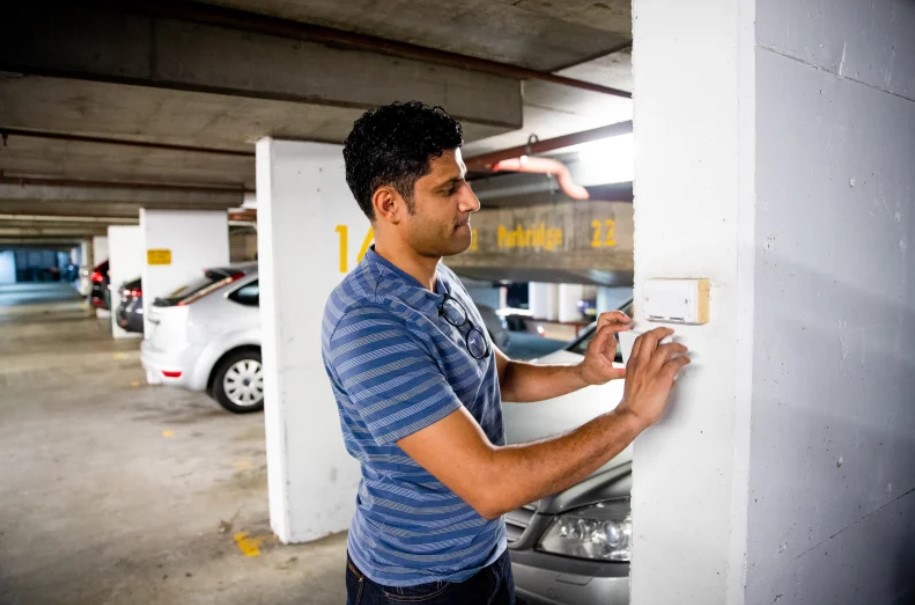 Dr Gupta in his carpark with the power point that was covered so he couldn’t charge his electric vehicle. CREDIT:EDWINA PICKLES

At a time when a huge number of apartment buildings around Australia are now having EV-charging systems installed in their premises, knowing that the ownership of EVs is taking off, Electric Vehicle Council CEO Behyad Jafari said this position was extremely short-sighted.

“The problem is that, for existing apartment buildings, there’s currently no consistent set of rules about how to approach this issue,” he said. “Strata committees often look at it and think it’s too hard, so they end up not bothering trying, and doing nothing at all.

“Yet there are now a lot of companies that can provide solutions for buildings in this position. Otherwise, it’s hard to expect the first person to get an EV to bear all the costs and pay for everything, so the second owner and the third and fourth pay nothing.”

Latest figures show that the number of NSW-registered EVs, hybrid petrol-electric cars and those using alternative fuels like hydrogen have more than doubled from 37,238 to 78,644 in the two years to September 2021. In Victoria, EV registrations have more than tripled in the past four years.

Nationally, annual sales have grown to around 20,000, with recent soaring petrol prices adding to the push to electric. “Everyone should have the right to have this option, and apartment buildings shouldn’t be able to hold people back from buying EVs” said Mr Jafari.

As for Dr Gupta, he still feels a huge sadness at having to go back to the technology of the past. “My role is to help people, not harm them with carbon emissions,” he said. “This short-sightedness has compromised my ability to do the best I can for the community.“

A NSW Fair Trading spokesperson didn’t make any comment on the rights of tenants – who make up 50 per cent of apartment residents – but said an owner could approach an owners’ corporation to make a by-law governing their use, or propose to install an EV charging station using the sustainability infrastructure process.

“If the owner cannot resolve the issue with the owners’ corporation they can apply to NSW Fair Trading for mediation,” she said.