Research reveals how much fossil fuel industries get from government subsidies

New research has revealed the fossil fuel industry benefits from more than $22,000 in subsidies per minute in Australia.

The study, released by the Australian Institute of Research on Monday, showed subsidies cost Australians a staggering $11.6bn every year.

This is a 12 per cent increase on last year’s figure and 56 times the budget of the National Recovery and Resilience Agency, which aims to help Australians impacted by natural disasters.

It is also 10 times higher than the nation’s Emergency Response Fund.

“It is perverse that Australian governments continue to subsidise fossil fuel production and consumption while communities across the country are bearing the costs of disasters exacerbated by fossil fuel use,” he said.

“We are witnessing Australia’s flood-stricken communities trying to pick up the pieces while fossil fuel interests are cashing in the tune of over $22,000 a minute.”

Mr Campbell said states and territories across Australia had reduced coal, petroleum and natural gas subsidies by over $200m but this figure was outweighed by the billion dollar increase in federal government subsidies.

“Worse still, these subsidies are growing and show no sign of slowing down,” he said. 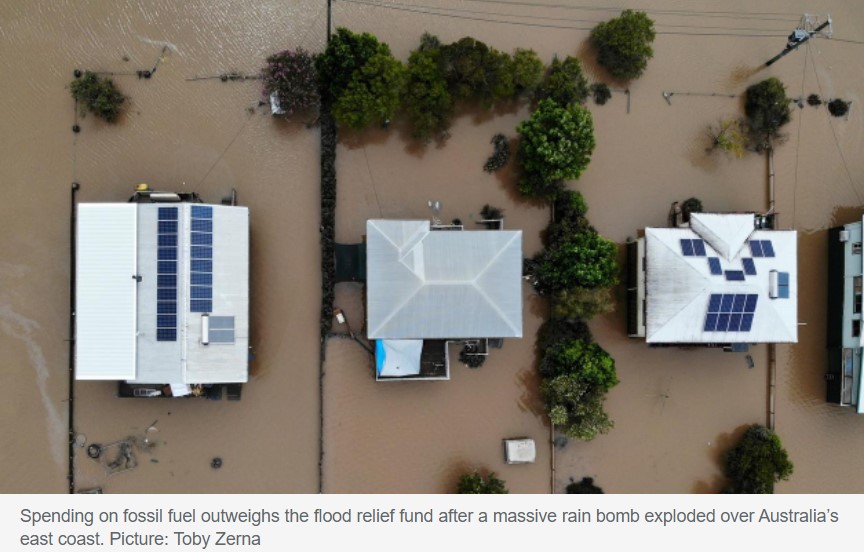 “It is the federal government driving increases in fossil fuel subsidies, with $6.7bn worth of new measures committed since the 2019 election.

“It is long past time for these irresponsible budget measures to be reversed and these resources directed to combating climate change and preparing Australians for its consequences.”

Over the longer term, $55.3bn has been committed to subsidising gas and oil extraction, coal-fired power, coal railways, ports, carbon capture and storage, and other measures.

The total value of budgeted fossil fuel assistance over the life of projects and the forward estimates of ongoing programs is $55.3bn.

By contrast, the balance of Australia’s Emergency Response Fund was $4.8bn in December 2021.