Energy giant Shell has questioned whether Andrew Forrest’s green hydrogen ambitions are achievable as it builds its own global projects in the industry.

Energy giant Shell has questioned whether Andrew Forrest’s green hydrogen ambitions are achievable in such a tight time frame as it places its own bet that a combination of gas and renewable supplies will be needed to meet international demand.

Shell’s London-based head of hydrogen, Paul Bogers, said he admired the billionaire’s drive in attempting to accelerate a giant green hydrogen industry but said the reality of delivering a raft of international pacts may prove more difficult to execute.

“We like the enthusiasm for the venture with a lot of memorandum of understanding and letters of intent being signed. But I think the reality is it’s still some time away before we can build these really large scale ammonia-based import export plays,” Mr Bogers said on Monday.

“We’re … not convinced that ammonia by default as it’s the most mature because ammonia is shipped already in larger quantities. We’re not convinced that that is the best way of shipping hydrogen over longer distances, because of how much energy you have to put in creating it.”

“It’s good to see Shell is acknowledging it’s going to happen, it’s now just a discussion on timing,” Dr Forrest said. “We strongly encourage these massive fossil fuel companies to use their huge infrastructure, very talented people and massive renewable resources from our environment, as that is the only way to save our environment … They can create the energy the world needs, leaving their fossil fuel in the ground, because time will run out, long before oil does.” 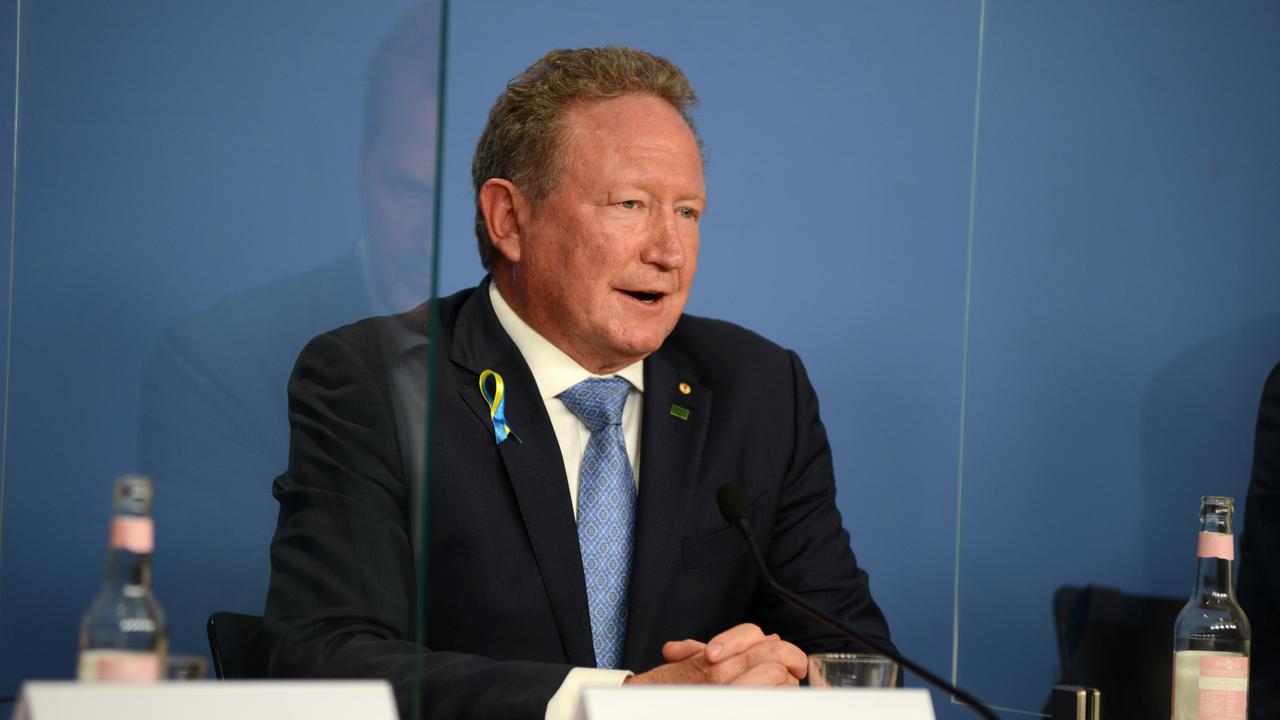 The nascent green hydrogen technology taps renewable energy sources to split hydrogen from water and can be transported as ammonia both within Australia and overseas. Shell also backs green hydrogen but said supplies from gas used with carbon capture and storage were also needed as the industry expands.

Shell, which said Russia’s invasion of Ukraine is propelling interest in hydrogen as an emerging energy source, said Dr Forrest was shaking up the industry but it still had doubts whether it can meet deadlines. “I think on the one hand he is helping the industry by being really bold, being very vocal and thinking big, and I think that’s where we have to get to,” Mr Bogers said.

“I think on the other hand, it has the risk of presenting a future that is a little bit further away than it is in reality. Remember those rearview mirrors and cars are saying the car is closer than you think. In this case I think it’s very optimistic to think that it can be done at this scale … so quickly.”

Analysis by The Australian last year showed Fortescue would need to find about $195bn to make good on all of the promises made so far by Dr Forrest on his global green energy spree.

Dr Forrest’s Fortescue Metals has committed to spend 10 per cent of its net profit on its green energy arm, Fortescue Future Industries, but the amount of capital needed to deliver projects has stoked growing concerns among some of the company’s major investors and analysts about the speed and scale of its global commitments as well as the projected return on investment.

Dr Forrest has lashed the federal government over fossil fuel subsidies, saying the use of taxpayer funds to help bankroll companies that are “busily cooking the planet” is anathema to halting global warming. He’s also lashed Santos and Woodside Petroleum for embarking on new gas projects, describing the duo as fossils for their carbon emissions.

Mr Bogers said Dr Forrest’s “needling” of oil and gas companies may help to shake up the hydrogen industry with Shell reconsidering its own timelines.

“He likes needling us and I think that that sometimes helps our senior leaders as well to say hey if this Australian billionaire sees something and wants to build it, what is our company’s perspective? Not about do we agree or disagree on the potential but more about do we agree or disagree on how quickly you could build something? And I think that is actually helpful for a lot of folks. Whether you like him as a character or not.”

Shell started up Europe’s largest electrolyser in Germany in 2021 producing green hydrogen and plans to boost capacity to 100 megawatts from 10MW. In Australia it announced a memorandum of understanding with BlueScope in December to develop renewable hydrogen projects at Port Kembla in NSW.

“No doubt Australia will be a really important part on the map for Shell but the starting point for us is slightly different in working from the customer backwards, rather than from supply forwards,” Mr Bogers said.