Electric vehicles are great, except when they are not

Electric vehicles are great. They are cheap to operate, require minimal servicing and are sooo much fun. Except when they’re not.

Since I acquired my 2011 Mitsubishi iMiev in 2013, it has only failed to turn on twice, and that was because the 12 volt auxiliary battery was dead, and without it – I discovered – nothing on the car would work. A quick phone call to the RACQ, and I was back on the road.

In 2019, while driving home, I came around a corner I had driven literally a thousand times to see a rather large kangaroo directly in my path. I braked hard and swerved, but the roo bounced in the direction of the swerve and I hit the poor thing in the exact centre of the bonnet.

A minute after the horrible THUMP, and while I was trying to stop traffic, the dazed roo got up and bounced away. The bonnet was slightly crumpled and the windscreen reservoir was cracked but otherwise the car drove as before. It was the best of what could have been a very bad situation.

For two years I debated whether to pay the $1000 insurance excess to get it repaired, as the range had fallen to about 75 km and there was no upgraded battery available. 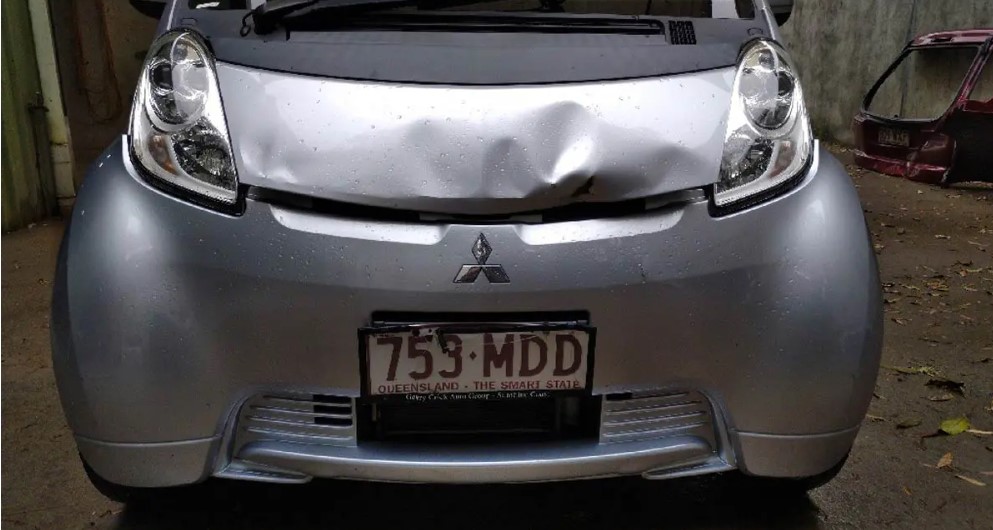 When I heard about an upgrade from a company in Brisbane, however, I bit the bullet, paid the grand and drove the iMiev to the insurance recommended repairer.

Parts would need to come from Japan to complete the $5000 repair, so they were ordered, I waited six weeks until they arrived and I again drove the iMiev in for the surgery.

One week later I got a call from the repairer that the repairs were finished but there was an error code, and the car would not drive for more than a few seconds. The insurer then towed the car to the local Mitsubishi dealer.  And here, my fellow EV fans, is where the real cautionary tale begins …

I had taken the iMiev to the dealer three times in the 8 years I owned the car, mostly to balance the battery cells. It was like pulling eye teeth.

On the first visit, they couldn’t charge the car because they did not have a charge cable. On the last one in 2019, I had the service department do a complete battery reset to see if I couldn’t get more range from the car and get an accurate display of remaining range.

I did get increased range according to the dash instrument (see pic), only it was 32 km more than the car’s maximum when new; and suspect they used the 2012 battery specs of a 16kWh battery pack instead of the 2010 battery, which has a 13kWh capacity.

It was just too much hassle to go back, so I simply relied on the bars remaining, rather than the km estimate.

Back to the future

After receiving the iMiev from the repairer, the dealership service team diagnosed a BMS fault, which had to be replaced and was ordered from Japan at a wait time of 3 weeks to 3 months.

After about six weeks of waiting, I called the service department to check and was told by the service manager – let’s call him George –  that he could not talk to me, as I was not the client.

I then called the repairer, who then called the dealership service who then explained that a part had indeed arrived, but it was under a different name. As the iMiev is the only car of its type in the area, there was a high probability that part was for my car, and indeed it was.

After waiting another week for George to come back from holidays, the new BMS was fitted, but there was no word when the car would be ready. Again, I called up the service department nearly a week after the part was replaced, and again, George said he could not talk to me without permission from the repairer.

When I talked to the repairer, he said he was waiting for the report from George, who promised him the report that day, but which did not arrive until the following day. The report was forwarded to me with a note that he would give permission for me to talk with George.

Removed and replaced BMU unit and cleared. tested and was ok and light did not reappear and car all ok. Found after main drive battery wont charge.

Checked electrics at charger and found to be all ok. suspect internal short/failure causing the car not to charge.… replacement battery pack $12169.52, requires ordering in from Japan. Full payment required for battery to be ordered.

On the next business day, I called George to get more detail. I asked about the battery cell voltages, which would give a good indication if the battery was actually faulty, bearing in mind that I drove the car to the repairers a few months earlier with a range of more than 70 km. So the possibility that the battery was faulty was low.

George said they could not measure the cell voltages, because the car would not go into the ‘ready’ mode.  I asked if they had checked the 12 V auxiliary battery because that makes everything work (as stated earlier, I replaced this battery twice when the car would no go into ‘ready’).

George replied that they tried to trickle charge that battery without success. I asked if they tried to replace the battery and George replied no, because it was not part of what they were asked to do, and if I wanted to pursue that a new service order was needed because the insurance ‘repair’ was complete.

I replied that it was absolutely imperative that battery was fully charged for everything to work and that I would come the next day with the RACQ to replace that battery.

I arrived about 11 am and with the RACQ began to test the battery. Very first thing the RACQ service person noticed was that one of the terminals was not fully connected. After tightening the terminal, and charging for 5 minutes, the car would go into “ready” mode. However, the RACQ agreed to replace the battery under warranty.

I then returned to the service area and asked George where I could plug my charge cable to test whether the battery would actually charge. George said if wanted to do that, he would need to raise another service order.

I was a bit shocked that such a simple request could not be accommodated, particularly as it seems their diagnosis was completely wrong. George reiterated and was adamant that checking the 12v battery and insuring it was fully operational was not under the service request.  He explained that they diagnosed a faulty component and replaced it, and cleared the code, so their job was done. End of story.

It was clear I had hit a brick wall of stupidity, so I had the car towed back to my house.  I plugged in the charger and the battery is now fully charged. End of story.

The car will drive for about 5 sec before shutting off and displaying the SAME error code as before it went to George. So after 7 weeks and a $2500 bill to the insurance company, NOTHING has changed.

When the car was returned to me, I found that the cover for the high voltage disconnect was on the passenger side floor with the two screws that it needs. That is not only sloppy work, it is dangerous.

The car was then towed to Suzi Auto in Brisbane, who specializes in EVs, particularly iMievs.  They diagnosed two “ground” faults, one indeed from the BMS as the Mitsubishi dealer had found.

Far from being faulty, however, the Suzi Auto tech said the BMS was doing what it was programmed to do: shut down in case of a fault. The other fault traced back to the electronic interface for the air conditioner, which when replaced erased the ground fault, and voila: the car runs OK.

Now, I do understand the nature of new technology, having built Australia’s first grid-connected residential solar system in 1993. New tech often comes with a big learning curve that takes some time to master.

But this example is not the way to do it. George made a faulty diagnosis that was based on an assumption and not on real data. And he could not get that real data because he didn’t understand the process of how their electric vehicle works.

I think what surprised me most was not a faulty diagnosis with a solution that was very expensive (and still would have not worked if the 12V battery was not charged), but that the service team was not even curious when presented with something that could have been a solution.

This was a perfect opportunity to learn something new, but it seems the dealership was only interested In replacing parts, and not solving a problem.

This was in stark contrast to the repairer, who went to great lengths to get the job done and spent lots of unpaid hours, but who was frustrated at nearly every turn by the dealership.

The reluctance of the ICE industry to promoting EVs has been covered before in the Driven. The current infrastructure of ICE car sales is based on dealerships that make much/most of their money on service, particularly as internet sales have driven down margins on the sale.

And EVs don’t often need service, as I was reminded by George when I said that I had better service in the past. “Your last service was in 2019 and yours is the only one on the Coast,” he sneered back.

So the economics are not aligned.  Combined with the lack of trained service personnel, the situation does not appear to be getting better.

Take my mate, Philippe, who has two i3s and faced a repair after someone slammed into one.  Towed to the dealership, his car sat inside a barrier for a month waiting for a ‘high voltage specialist’ before they could assess the damage. Philippe could not even retrieve his charger from the frunk.

“It’s doing my head in,” he told me. “When it works it’s beautiful, when it doesn’t it’s a disaster. Everyone is terrified of even a little tiny problem. You are on your own. It’s very, very, frustrating.”

It’s now more than two weeks since writing a letter to the dealership and also contacting Mitsubishi for comment. The silence is deafening… so deafening that when I called the number for the media manager given to me in an automatic reply, the recorded message told me the number had been disconnected. Perfect.

So before you hand over your hard earned currency for that shiny and sexy EV, be aware of its Achilles Heal: Service.

Extracted in full from: Electric vehicles are great, except when they are not (thedriven.io)