Electric cars are the future, no one is denying that.

But is the world ready to go fully electric? In Australia, probably not – the infrastructure is just not there yet.

If a fully electric car doesn’t seem practical right now, an EV hybrid might be a more viable option. Well, it could actually be your only option.

Sales of EVs have skyrocketed in recent years, hybrids included. The latest report from the Electric Vehicles Council shows sales in Australia tripled from the previous year.

If you’re looking for a brand-new Tesla in a hurry, their website currently says there’s a wait time of up to 12 months.

While there’s no surprise Tesla are leading the electric vehicle market in Australia, the second most popular EV was MG Motors’ ZS EV – a fully electric SUV.

MG Motors is one of a handful of carmakers who offer a slightly more affordable alternative, with their latest model giving the others a run for their money.

It’s not a brand one would suspect to offer an EV motor, but the British turned Chinese car manufacturer has been booming in Australia in recent years.

The MG HS Plus EV could just be one of the most affordable EV Hybrids on the Aussie market – but, as with anything, affordability can come with its downsides.

In Australia there are currently 30 plug-in hybrid cars on the market, as well as 34 different types of fully-electric cars.

I recently got behind the wheel of the latest MG hybrid to put it to the test, from its battery performance to the interior tech.

What does a full charge on the MG HS Plus EV cost and how far can you go?

The MG HS Plus EV battery allows you to travel around 70km on a full battery.

A full tank of petrol mixed with the electric battery will get you to wherever you’re going.

I monitored power usage at home while charging the car. On average, it cost me 0.55c per hour to charge, or a bit under $5.00 for a full battery.

Keeping in mind the above reading also includes my TV running, amongst other things, at the same time.

Unless you’ve got a battery charger connected to the house, it’ll take eight to nine hours for a full charge.

But with the right connection in a garage, this is something you could leave overnight.

I drove the MG HS Plus EV to and from work on electric alone, around 20km each way, without a hitch – but on occasion, while caught in heavy traffic, I felt it was safer to switch to petrol mode.

While it’s simple enough to switch over to EV only mode, I did find it difficult to locate a way to move the engine over to petrol only. The purpose for wanting this was to assist in recharging the EV battery faster.

Driving in full EV mode is perfect for your trip to the supermarket or school drop-off. Going to and from work in traffic is where the line is drawn. 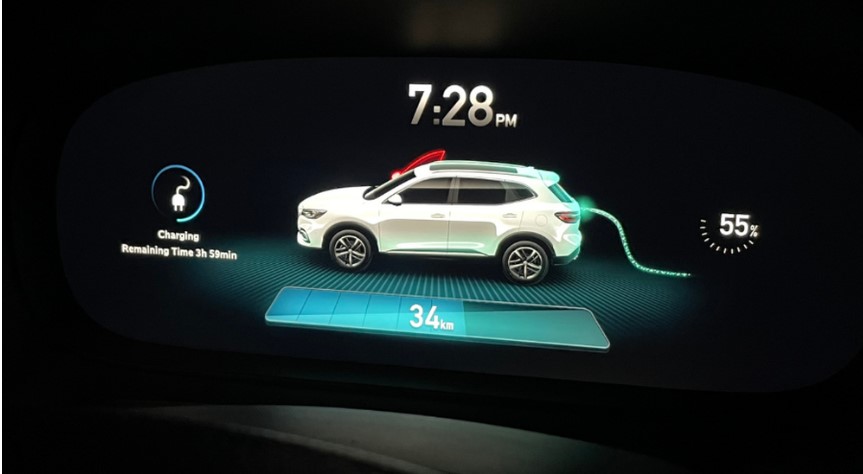 What intrigued me the most about this car was its ability to recharge (well, at least partly) the battery while you drive – a feature that’s prevalent in most electric cars.

It won’t save you charging your car when you get home, but you can use it to your advantage.
MG HS Plus EV Features
Hybrid power isn’t the only thing the car has going for it, there’s a stack of features that bring the MG HS Plus EV to a luxury level.
While a lot of the tech isn’t new, it’s certainly an upgrade from my 2015 VW Jetta.

While driving on the freeway, the HS Plus EV seemingly detects how fast the person in front of you is driving and matches their speed.

While the car includes its own user interface and GPS navigation, Apple CarPlay was the winner.
Unfortunately, the head unit and dashboard controls are frustratingly slow.

There’s also no volume control knob in the car, instead, you need to press down on the tab-like buttons, which also present a slight delay.

If you’re in the market for a hybrid vehicle and don’t want to wait long, MG’s factory is pumping these cars out like no tomorrow.

It is certainly one of the more affordable hybrid vehicles on the market too, but in terms of tech there’s definitely room for improvement.

The MG HS Plus EV is spacious, comfortable, provides good distance and would be a great family car.

he infrastructure might not be there just yet, but government grants are kick-starting EV destinations, such as wineries, wedding venues and other tourist attractions.

The New South Wales Government announced last week that $20 million in grants are available to set up chargers across regional areas.

While the government won’t be paying the whole cost, MG Motors has put their hands up to say they’ll happily cover the remaining gap, up to 25 per cent, for eligible customers.

These charging stations can be used by any brand of electric car, more information can be found on MG Motor’s website.
Extracted in full from: Hybrid car sales boom as EVs prove hard to catch (9news.com.au)