Not enough plugs: Australia is driving headlong into an EV fast charging crisis

It’s no secret that Tesla owners are pretty happy about the electric cars they drive, and they are also pretty pleased with the EV charging options that the company has provided: The most comprehensive “super fast-charging” network in the world, multiple charging spots at each location, and any number of convenient but slower “destination” chargers.

We make the trip from Byron Bay to Sydney and Canberra often. In the Tesla Model 3 SR+, Bryon to Sydney can be done with just three 20-minute stops at Tesla super-chargers to top up the battery. One of the installations is located at a very nice winery, and it’s tempting to stop longer for a nice lunch.

Sydney to Canberra is a little over three hours in the SR+, with one short stop on the way there, but none needed on the way back (it’s downhill), although we don’t mind breaking it up.

Last week I got a deep dive understanding of the problems facing those who don’t have access to the Tesla network when they do long trips, particularly as the number of new EVs outstrips the available infrastructure, when I took a Hyundai Ioniq 5 for a country trip from Sydney to Canberra and back. There’s nothing like appreciating it first hand.

We’ve already written several stories about the problems with the reliability of the fast-charging network in Australia, and the number of charging stations not working or out of action for some reason.

But as this trip illustrated, there are simply not enough charging stations, even if they are all working.

The trip down wasn’t a big deal. I stopped at the Goulburn fast charging station where there are actually three charging points. One is broken, another has a broken screen but apparently works, while the third is fine.

It was late at night and no-one else was there. I connected and charged with no problems (albeit at a slowish 70kW average), and within 15 minutes I had easily enough to get to my destination and was on my way again.

On the way back it was a different matter. Granted, I left Canberra with only a 50 per cent charge, but I often do that in the Tesla, counting on a stop for a coffee in Goulburn at the Supercharger station there, where there are eight charging spots. And where Tesla moves you on after 30 minutes if it is busy. 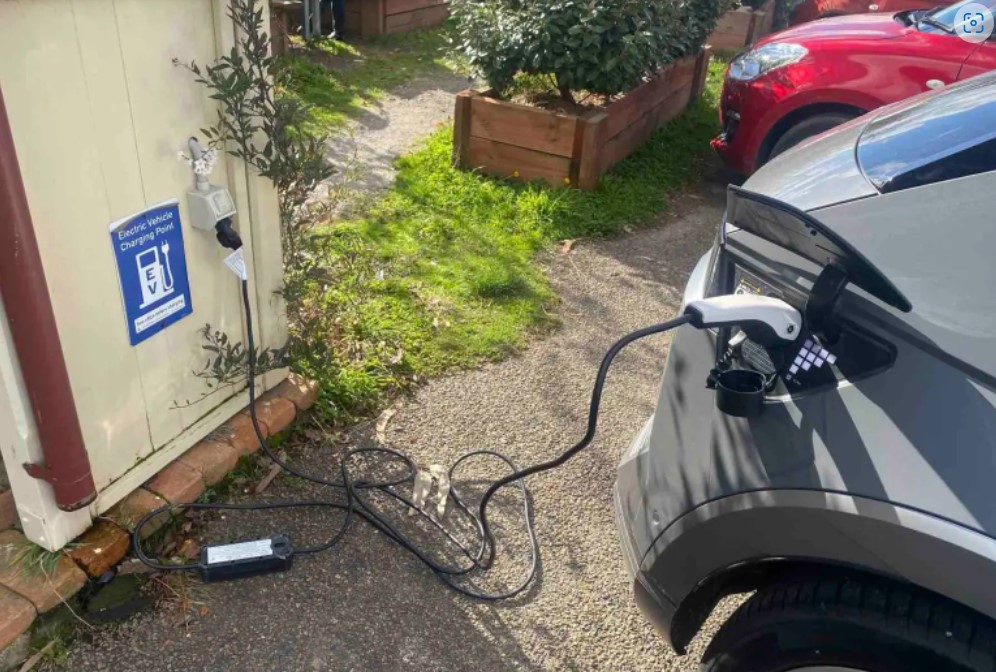 TRICKLE CHARGING AT SOME CAFE IN COLLECTOR.

But I wasn’t in the Tesla and even though I had “trickle charged” when I had stopped at the fine Some Cafe in Collector to enjoy their toasties and coffee, edit some stories and finalise the daily newsletter, it only added around 2kWh in the hour I was there. (But good on Some Cafe for offering the service).

But then it was off to the other Goulburn fast-charger, round the back of the Shell service station, next to bottle returns and the rubbish skips. Again, one spot was out of action. It seems that at any one time there are dozens of charging stations out of action, some of them for months. They blame a shortage of spare parts.

The other two charging spots were occupied, by a Mercedes and an Ioniq, including the one with the broken screen. I waited 20 minutes before the Hyundai Ioniq finished and moved on, and tried to plug in.

It was the same charging station I had used on the way down. But this time, for reasons that escaped me, it didn’t work. For 15 minutes I tried, and retried and tried again. No dice.

I still had plenty to get to the next charging station, a single NRMA fast-charger at the Mittagong RSL, around 80kms away, so decided to head there.

But a Tesla Model 3 Performance had beaten me to it by 20 minutes, and was still only at a 27 per cent charge. It must have been low when it got there and I was in for a long wait, and so was the MG ZS EV that arrived 5 minutes after me on the way to Canberra.

The Tesla eventually unplugged after about an hour – it still wasn’t fully charged – and I plugged in the Ioniq 5 for around 40 minutes to take it back up to around 60 per cent; enough, I figured, to get me to my destination in Katoomba in the Blue Mountains.

I was cutting it a little bit fine and if there was no one else around I would have stayed longer and put more in. But the MG had already been waiting for around an hour and a half, and another was waiting in the wings. I had enough to get to my destination, so I unplugged and moved on.

But this act of generosity had its consequences. My host in Katoomba had no off-street parking so there was no option to trickle charge overnight. And – amazingly – the entire Blue Mountains has zero fast charging charging options, just a couple of Tesla destination chargers for visitors to a private lodge and at Scenic World.

There was a suggestion on the PlugShare app that the Scenic World Tesla destination charger might accommodate non Tesla cars (some of them apparently do), but I went down and tried and there was no dice with either of them.

They had a power point so I trickle charged (2kW) while I went for a walk to replace the power I had used to dash down to Scenic World, and then – en route back to Sydney – set off  to the nearest fast-charger, some 60kms away near Penrith, with what the car told me was just 68kms of range left in the battery.

I put it in eco-mode and resisted the temptation to accelerate away at the lights. I need not have bothered. One of the beauties of going down hill is that you don’t use much of the battery, and it puts back in nearly as much as it uses. 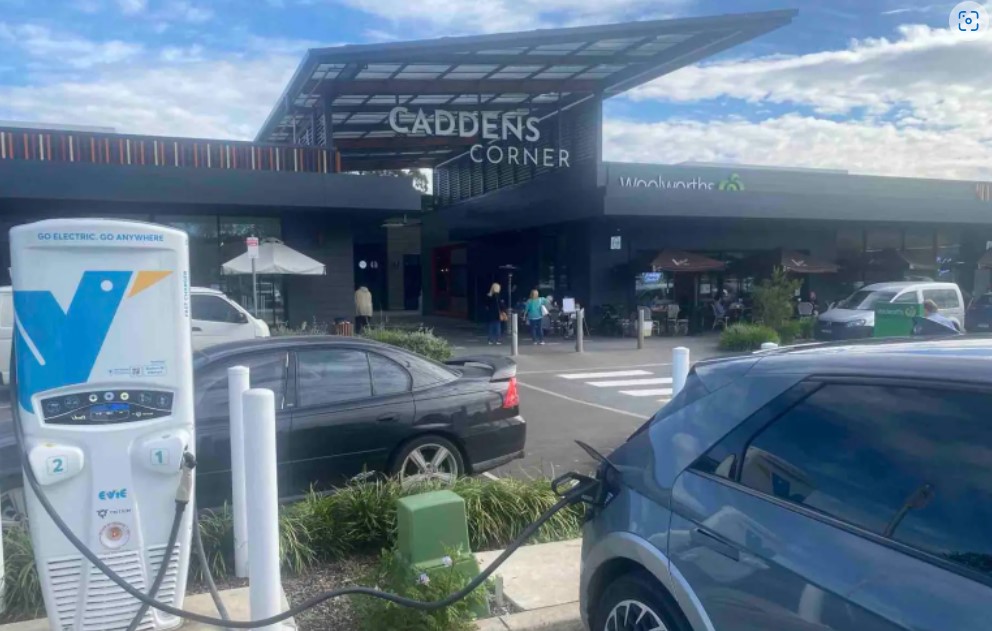 I left Scenic World with 19 per cent and 68kms of range (which I thought was a bit pessimistic), and arrived 60kms later at the Evie charger at Caddens with 15 per cent still in the battery and with 67kms of advertised range. Thankfully, the new fast charger at Caddens was not occupied, and it was working fine, with cafes and shops nearby.

But the experience underlines a major problem, State and federal governments and the likes of NRMA and private networks have been trying to fill in the gaps in the charging networks, but they often do so with just a single charging station, which results in queues at busy periods and no redundancy if it’s out of order.

The Tesla network, located at convenient spots, has very high reliability – 96 per cent according to its own annual report – and multiple stations, always at least four but usually six or eight. Overseas, it has even more. And they don’t allow EVs to sit there for more than one hour if it’s busy. In fact, Tesla now cut people off after 30 minutes at some stations.

(Some new EVs with big batteries are taking 90 minutes to charge at some public 40kW “fast chargers”. Even if there is only one working charging station and a queue.)

There’s much everyone can do. Tesla is under pressure to open up its supercharging network to non-Tesla EVs, and has started doing so in several European countries. Other countries will follow. Other private networks and governments might want to insist that there are at least two charging spots at each location to boost resilience and reduce wait times.

And drivers themselves can be a little more considerate – if they really don’t need to get to 100 per cent (and EVs rarely do), then please move on if you have enough charge.

The good news for the incoming Labor government – which has grand plans to roll out EV charging infrastructure – is also the bad news: Demand for EVs is surging, and sales tripled in 2021, but the supply of new EVs in Australia is slowing to a trickle, thanks to the global supply crunch and the decision by most major car makers to prioritise other country markets, due to their strict vehicle emissions standards.

That will give federal Labor and the state governments a little more room to get the rollout right. Yes, more charging stations, more ultra fast charging stations (to cope with new EVs with 100kWh batteries or bigger), and please, multiple charging points at each location. And maybe some signs or even controls for etiquette, or caps at 80 per cent.

Tesla can achieve this, because all the stations and the cars themselves are on the same network. And Tesla thinks about these things. It will be harder for the other car manufacturers and networks to co-ordinate.

When it is clear there will be sufficient infrastructure in place, Labor can maybe introduce the vehicle emissions standards, to encourage the big car makers to bring their new EVs to Australia too. Thanks also to the soaring petrol and diesel prices, it seems everyone wants one.