The joy of the petrol tax cut has well and truly worn off as the price of fuel rises despite the measure – and that’s just the start of our woes.

The joy of the petrol tax cut has well and truly worn off as the price of petrol rises as high as before, and even more in places.

In the March budget, the Treasurer handed us all a 22 cents per litre tax cut. That saw petrol fall in price from around $2/litre to $1.78/litre in the week or two afterwards. The price of petrol kept falling for a little while, bottoming out under $1.60/litre briefly in April. That brief period was a welcome respite for many Aussies who have been whacked by high inflation. I filled up my tank.

Cutting the petrol excise every time the price goes up is not a clever or sustainable policy. It’s expensive for the budget and bad for the environment. What’s more, it doesn’t stop what happened next: Petrol started going back up.

Prices got back to $2 a litre and did not stop there, instead smashing through that barrier to challenge record highs. Today my closest petrol station, here in Melbourne, is charging $2.29 a litre. The average across Melbourne is $2.10, according to Petrolspy.

Note that the tax cut is still in place. It hasn’t gone anywhere. Which means petrol will go up by another 22 cents when the tax gets slapped back on. It would be over $2.50 a litre at the local servo. Remember the tax cut is only supposed to last six months – it was Josh Frydenberg’s attempt at an election sweetener. That 22 cents per litre is scheduled to go straight back onto your fuel bill at the end of September.

The price of oil is near record highs now, of over $US108 a barrel. As the next chart shows that’s up a whopping 75 per cent in the last year in US dollar terms. In the same period our dollar has got 10 per cent weaker which further increases the amount of Aussie dollars we need to pay for oil on international markets. All of which flows through to petrol prices. 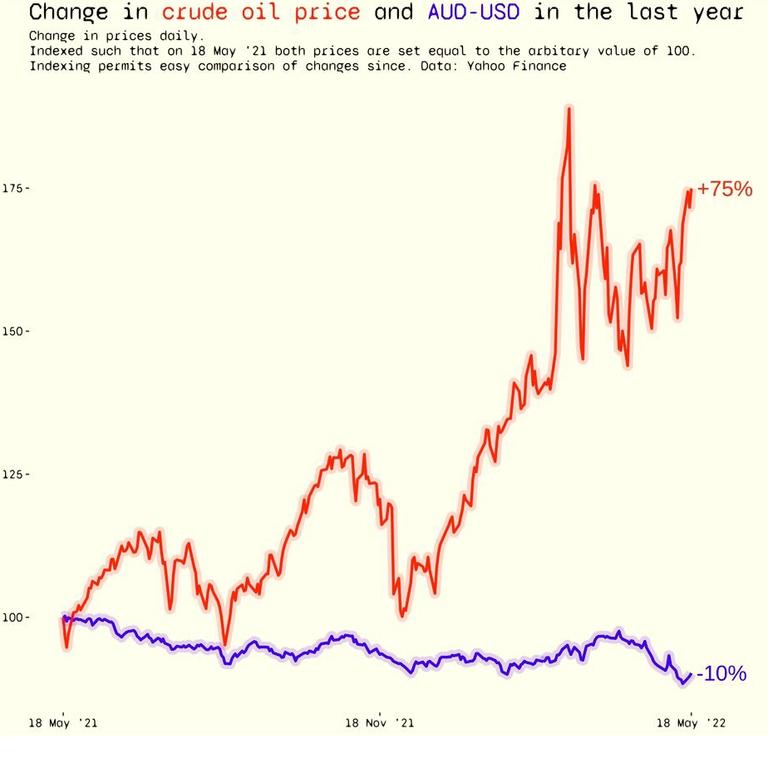 Crude oil is skyrocketing while the Aussie dollar weakens.

High oil prices are due to the crunch in global energy supplies caused by the pandemic, supply chain issues and Russia’s ill-advised war in Ukraine. And when you’re standing there on the concrete forecourt of the servo with your hand clamped down on the metal handle and the smell of diesel in your nose, those high global oil prices make the numbers on the bowser move so fast they blur.

The terrifying question is this: Will the price of fuel still be this high when the excise cut wears off. Will it fall back down? Or could it go even higher?

Even if oil prices fall, the return of the 22 cent excise might be the final straw for some families. Interest rates are forecast to rise another 1.4 per cent by September, which will add hundreds of dollars a month to average Australian mortgage repayments.

The RBA forecasts inflation of 6 per cent this year, which means groceries and other items are also likely to cost hundreds of dollars more a month. A massive fuel price hike on top of all of that is going to be very unwelcome.

The average couple with kids goes through about 50 litres of fuel a week. That’s over $100 now. Of course, fuel is far from the biggest expense the average Australian household faces – rent, mortgages and food are much more – but it hurts disproportionately because it is a product with few good substitutes.

Some people can afford to pay the premium for a new electric car. But the total number of electric car sales in Australia in history is similar to the number of new petrol cars sold each month. Petrol still matters for cost-of-living in this country

And yes, lots of people ride public transport with delight. I’m one of them. I love to use the train or tram. But it doesn’t work for everyone. If you have a brood of small kids to accompany, a lot of tools and equipment to transport, or your workplace isn’t near a train station or bus stop, choosing public transport will add unrealistic time or hassle.

When beef goes up you can eat chicken. When fuel goes up, we generally just suck it up and pay what they are asking. It then eats into our budgets, so high petrol prices are kryptonite for consumer confidence.

As the next chart shows, consumer confidence is already in parlous condition. I am terrified to think what it might look like after the fuel excise cut lapses. 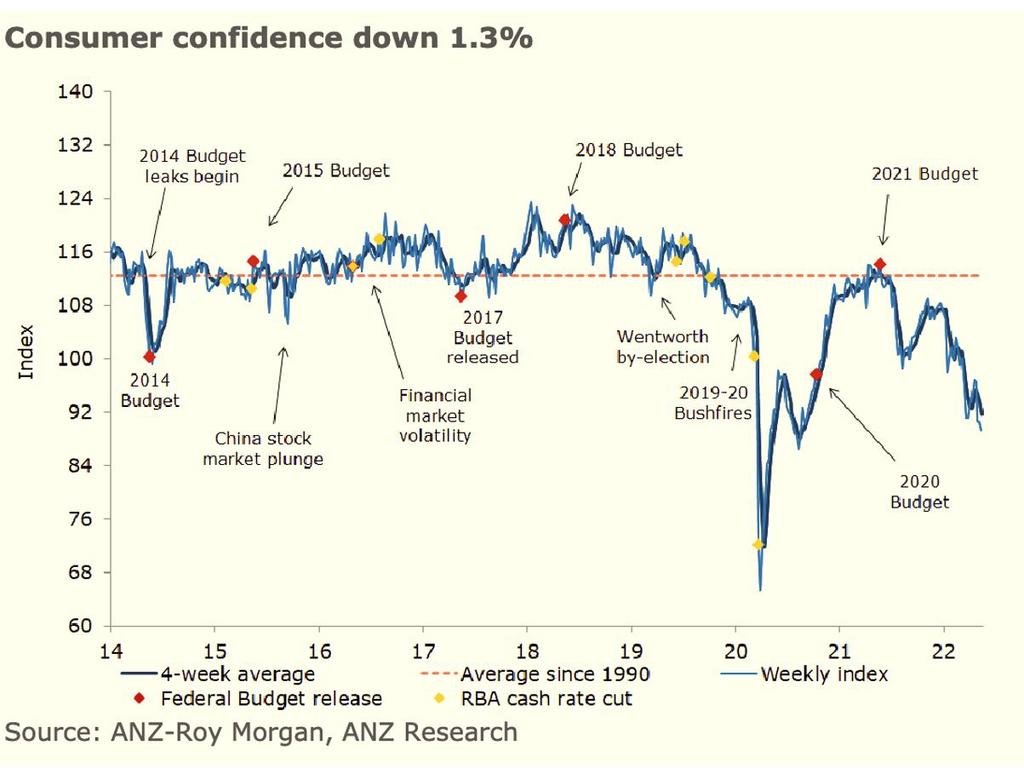 Whoever wins the election is going to have hard job on their hands managing a country full of people who’ve had a gutful of inflation, even before the 22 cents per litre fuel tax cut expires.

It’s going to be a tense countdown to the end of September for politicians and people alike.

Extracted in full from: Petrol prices are rising despite tax cuts as another interest rate hike is due | news.com.au — Australia’s leading news site