Shell (SHEL.L) almost tripled its profits in the first three months of the year as oil and gas prices surged around the world.

The energy giant reported an adjusted profit of $9.13bn (£7.3bn) in the first quarter, up from $3.2bn in the same period last year.

The results, which are Shell’s biggest quarterly profits since the beginning of 2009, are fuelling calls for a windfall tax to fund measures that would tackle rising household energy bills.

He said: “Boris Johnson and Rishi Sunak’s refusal to tax the super-profits of energy companies is completely unforgivable when people are too terrified to heat their homes.

“The excuses of Conservative ministers have been demolished by the boss of BP himself, who said a windfall tax wouldn’t damage investment in the UK.

“This one-off levy would raise billions of pounds that could help vulnerable families with their energy bills now. It is a no-brainer.”

Campaign group Greenpeace said a windfall tax would be the “fastest and fairest way to ease pressure on households feeling the pinch and reduce our dependence on oil and gas”.

Greenpeace UK’s oil and gas campaigner, Philip Evans, said: “By using a big chunk of the bloated profits that Shell, BP and others are raking in to make homes warmer, more energy-efficient and kitted out with heat pumps, the Government could start to really tackle the climate and cost-of-living crises simultaneously.”

The government has resisted calls for such a levy. Boris Johnson has said it would discourage oil and gas producers from making investments into domestic energy.

Soaring energy prices pushed UK inflation to a 30-year high of 7% in March, and some economists fear it could hit 10% this year, intensifying the cost of living crisis.

Shell said it had taken a $3.9bn hit after it ditched its Russian investments after the invasion of Ukraine in February.

“The war in Ukraine is first and foremost a human tragedy, but it has also caused significant disruption to global energy markets and has shown that secure, reliable and affordable energy simply cannot be taken for granted,” CEO Ben van Beurden said.

“The impacts of this uncertainty and the higher cost that comes with it are being felt far and wide. We have been engaging with governments, our customers and suppliers to work through the challenging implications and provide support and solutions where we can.” 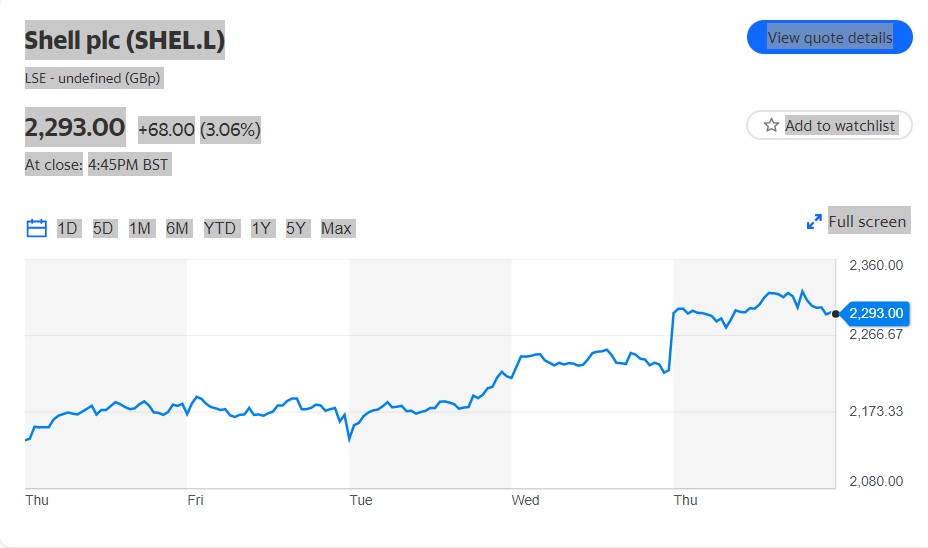 Total shareholder distributions in the last quarter were $5.4bn. That includes $4bn of the $8.5bn share buyback announced in February, with the remaining $4.5bn expected to be completed before its second quarter 2022 results.

Energy firms have cashed in on the recent rise in oil and gas prices. This week, rival BP also reported a sharp rise in profit, as did France’s TotalEnergies and Norway’s Equinor. US oil giants Chevron and Exxon Mobilalso reported strong first quarter profits.