A new look, and smell, as service stations charge into future

What will the service station of the future look like? Hopefully it will feel more luxurious, and smell a lot less pungent, as we shift to a petrol and diesel-free world, albeit one with the longer refuelling times of electric vehicles.

In Germany, of course, it is already possible to experience just such a future. German luxury brand Audi has announced plans to roll out a number of modular, environmentally conscious electric-vehicle charging hubs, and has already opened its first, at Nuremberg.

Built to service urban EV drivers unable to charge at home, the success of the Nuremberg charging hub, which has seen 60 per cent of its client base become repeat customers, has led to further planned launches, starting with a hub in Zurich’s downtown financial distract in the second half of 2022.

According to Audi charging hub project manager Ralph Hollmig, customer feedback for the Nuremberg hub – which boasts a near 200 sqm lounge, a large terrace, catering and a concierge – has been encouraging. 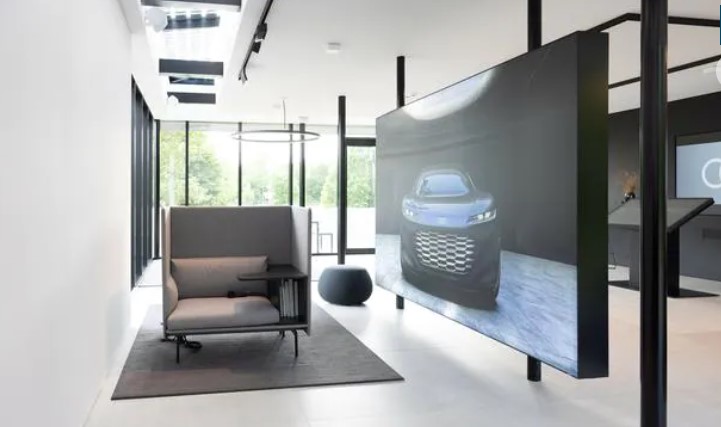 “The numbers and positive customer feedback demonstrate that our concept of offering flexible, premium quick-charging infrastructure in urban spaces was spot on,” Mr Hollmig said.

Consisting of flexible cube-shaped containers that can be rapidly assembled and disassembled at existing sites, the charging hubs only use energy from sustainable sources, via a 200kW connection through a low-voltage network that runs parallel to the primary electric grid.

In addition to the Zurich site, which will also offer shopping and e-bike sharing facilities, Audi charging hubs will soon open in Berlin and Salzburg, with further sites across Germany planned for next year and beyond.

Taking a cue from Audi’s charging hubs is BK Group, with the German interior construction company opening its own ­charging hub called BK World in Endsee, Bavaria, which aims to turn “waiting time into quality time”.

The idea came to BK World founders Gerold Wolfarth and Marc Arnold after an EV charging stop in the middle of the night.

The whole idea for BK World was conceived from the user perspective. In other words, as the driver of an electric car, what is it that I really need during a charging break?” Mr Arnold said.

Located at a Tesla Supercharger Park with 20 rapid-charge spots, the debut BK World offers standard features such as toilets and a lounge, but also business meeting rooms, a children’s play area and healthy food and retail goods from regional suppliers, with a focus on sustainability (the Endsee location offers, among other things, Franconian wines and award-winning chocolates).

Made up of modular “Qubes”, BK World also boasts the ability to be assembled and disassembled with ease.

“With BK World, charging park operators no longer have to rely on existing infrastructure. We simply come to wherever a charging park has been set up. All we need is a connection for water, wastewater, and electricity, which means we can put our lounges in practically any location,” Mr Wolfarth said.

Designed to offset more CO2 emissions than it causes, BK World will roll out to an additional 300 European locations over the next five years at already established charging parks.

Extracted in full form: A new look, and smell, as service stations charge into future (theaustralian.com.au)