Fuel prices break pre-excise cut records, and the worst is yet to come

Motorists in South Australia and the Northern Territory have set a concerning new milestone this week, with fuel prices returning to a level higher than before the 22.1-cent fuel excise cut was temporarily implemented as a way of reducing price pain at the pump.

However, this looks to be a very short-lived reprieve as prices have been steadily increasing in all states, with South Australia and the Northern Territory crossing the previous high watermark for fuel prices at $2.28 and $2.10 per litre of 95RON unleaded respectively.

This is more concerning given we are less than halfway through the excise relief period, which will see a further 22.1c added to every litre of fuel around the country from 28 September.

While other states have average prices still under the pre-excise cut highs, they aren’t far off.

In 100 days time the fuel excise cut will end, and at current prices, motorists will see an average price for 95-octane unleaded of $2.38 per litre.

If prices continue to rise at the current rate that they have since the lowest point on 19 April ($1.88 per litre), we’ll be dealing with prices around $2.50 per litre on September 27 and a hefty $2.72 when the excise discount ends on 28 September. 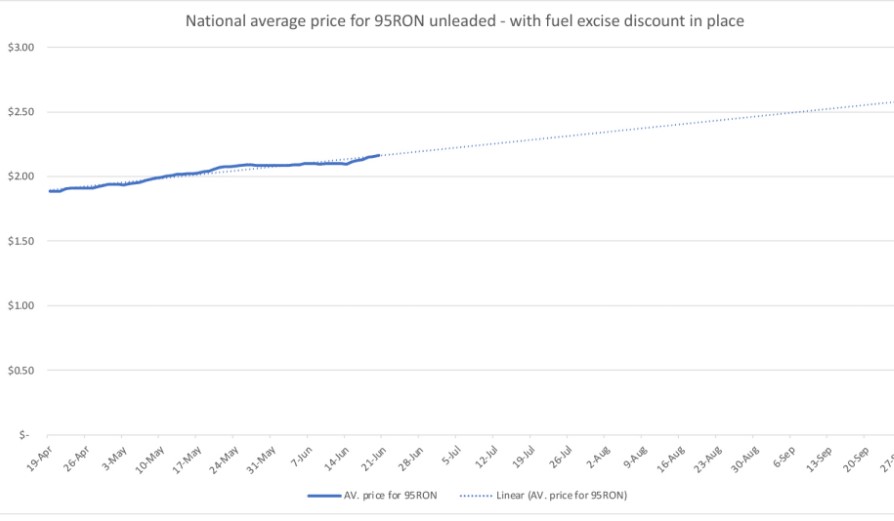 Extracted in full form: Fuel prices break pre-excise cut records, and the worst is yet to come – Drive