Hamburg: The first of Jetstar’s new long-range, fuel-saving, quieter aircraft will arrive in Australia next month, delivering a potential “game-changing” effect for regional travel as the sector attempts to break free of two bruising years.

After more than four years of waiting – with a pandemic and resulting recession delaying their delivery – the Airbus A321LR NEO will seat 232 passengers in all-economy class single-aisle planes that will offer travellers greater affordability and comfort for travel within Australia and to several new destinations in Asia and the Pacific.

Low-cost airlines have led the post-COVID recovery in the aviation industry, with Jetstar eclipsing its pre-pandemic domestic levels earlier this year before winding back operations following disruptions to Easter travel as staffing shortages hit airlines and airports.

Two years of locked-down cities, travel restrictions and sudden border closures has dramatically changed the way people are booking holidays, with data from the airline showing one-in-four domestic flights between January and March were booked within five days of travel.

Domestic travellers are now also more likely to stay at their destination longer, with fewer trips of one to three days and an increase in four to seven days.

While Qantas has forecast it would make a significant loss this year of between $450 and $550 million, slashing some domestic routes on Friday because of rising fuel costs, it has predicted the group – which includes budget subsidiary Jetstar – will return to underlying profit in the next financial year.

The first of 18 NEO (new engine option) planes to arrive over the next two years will be deployed on a Melbourne to Cairns route within weeks, before becoming a regular fixture to Bali. It will free up the fleet of Boeing 787s for new overseas destinations and routes, including potential new routes from Melbourne to Fiji and flights to Japan and Korea.

The new aircraft are fitted with ergonomic seats with tapered arm rests to maximise space, and include extra-large overhead bins which the airline estimates will be able to fit 60 per cent more items of luggage.

All seats will have flip-down smartphone and tablet cradles as well as in-seat USB power, with specially designed mood lighting that adjusts to the different stages of flight, helping nervous flyers relax and others sleep to prevent jet lag at the other end.

Jetstar has followed several other low-cost carriers in Europe, including easyJet and Wizz Air to bet on the A321LRs to grow their business, hailing it as a “game-changer” by allowing them to sell more seats, fly 1200 kilometres further than previous fleet, while becoming among the greenest and lowest-cost airlines. 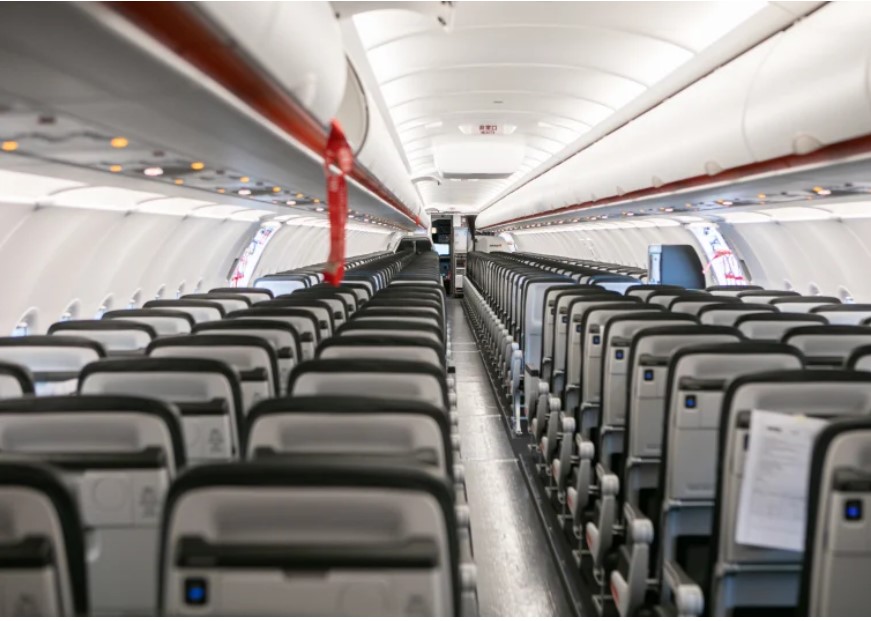 The interior of the plane that Bali-bound Jetstar customers will be using in coming years.

Greg Eastaway, Jetstar’s fleet manager, will pilot the first of the new planes from Hamburg in the coming weeks, refuelling in Mumbai and Broome before heading to the airline’s Melbourne base.

Inspecting the Airbus factory in Hamburg on Thursday, where the aviation giant is ramping up production despite challenges facing the aerospace sector amid the war in Ukraine and strains in the economy, Eastaway said the A321LRs were the most technically advanced single aisle aircraft to join the Jetstar fleet. About 20 of the next generation A321XLRs, which can fly even further with a 30 per cent lower fuel burn, will also arrive from mid-2024.

He said they would allow the airline to tap into new long-haul markets not previously accessible with current single-aisle aircraft.

“They’ll give us some exciting new destination options which we will be reviewing over the coming months,” he said. “They will also add capacity on popular routes with the potential to free up some Boeing 787 flying for use on other, longer international leisure routes.”

The Qantas Group has outlined specific steps it is taking to achieve net-zero emissions by 2050, including an interim target to reduce carbon emissions by 25 per cent by 2030 as part of its climate action plan.

Eastaway said the new engines burned around 15 per cent less fuel than previous generation aircraft and a new livery two-coat “basecoat-clearcoat” system had reduced the paint weight by up to 30 per cent.

He said the average new plane would save around 1.2 million kilograms of fuel per year compared with its current generation aircraft – a reduction of almost 4000 tonnes of emissions, equivalent to removing 1500 cars from the road each year.

Eastaway said that would result in a fuel saving of up to 108 tonnes each year across the whole A321LR fleet and a saving of nearly 350 tonnes of carbon emissions.
Extracted in full from: Jetstar fuel-saving aircraft a ‘game-changer’ for Australian low-cost flying (smh.com.au)