Robert Abdulla to be sentenced for Belair service station robbery

A meth-addicted father and footy player who robbed a service station with his drug associate said he was ashamed by his actions.

Robert John Abdulla’s life was spiralling out of control when he armed himself with a tyre iron and committed the violent robbery.

The Adelaide District Court on Tuesday heard Abdulla, 31, and Rebecca Rose Hutchins, 35, attended the Belair On The Run service station on August 7.

“The victim was working alone in the early hours of the morning when she’s confronted by the two offenders,” a prosecutor said.

“Ms Hutchins jumps over the counter and demands the victim open the till.

“When the victim tried to retrieve her stolen phone, Ms Hutchins punched her to the face.”

The court heard Abdulla, who brandished a tyre iron at the victim, fled with Hutchins after stealing cash and cigarettes.

The court heard the offending had a “significant impact” on the victim.

“The offenders were motivated by personal gain and were prepared to intimidate the victim and use actual violence against her,” the prosecutor said. 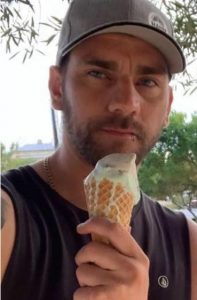 Hutchins, of South Hummocks, has pleaded guilty to theft using force and will face sentencing submissions later this month.

Brad Dittmar, for Abdulla, told the court he had been heavily abusing methamphetamine and committed the robbery with Hutchins so they could continue their drug-fuelled lifestyles.

Mr Dittmar told the court Abdulla had played for several northern suburbs football clubs, as well as working in sales and marketing and the construction industry.

The court heard Abdulla had been living a prosocial life but returned to methamphetamine use in 2018 after a relationship breakdown and his father passed away.

“He stopped playing football, lost consistent employment and his use spiralled out of control and he became addicted,” he said.

“Mr Abdulla concedes his behaviour at the time was consistent with a sense of entitlement and a lack of consideration for others which he is very ashamed by.”

Mr Dittmar said this was Abdulla’s first time in custody and the offending was out of character for the western suburbs scholarship student.

He’s been able to see first hand what happens to others if they’ve not stopped their use and not changed their ways and that’s not a future he wants for himself,” he said.

Judge Timothy Heffernan will sentence Abdulla at a later date.