Tanks for the memories: how old Aussie petrol brands faded

Petrol stations are in every main street in Australia and their brands – even those that faded from view many decades ago – are among the most powerful and enduring today.

But why did these lost petrol brands disappear?

Why is their memory so indelible?

And what effect has the closure of many service stations since the 1970s had on commercial real estate?

The rise of petrol brands in Australia

Acquisitions and mergers have dominated the face of Australian fuel retailing.

In 1900, businessman R.W. Cameron became an Australian agent for the Texas Oil Company.

The next year, American firm Standard Oil of New York set up an Australian company, the Colonial Oil Company, to import motor fuel.

The Royal Dutch Trading Company and Shell Transport Trading Company joined forces in Australia in 1905 to form the British Imperial Oil Company. By 1927, it became the Shell Company of Australia.

The Kitchen family established Neptune in 1909, selling to the Lever Group in 1914. 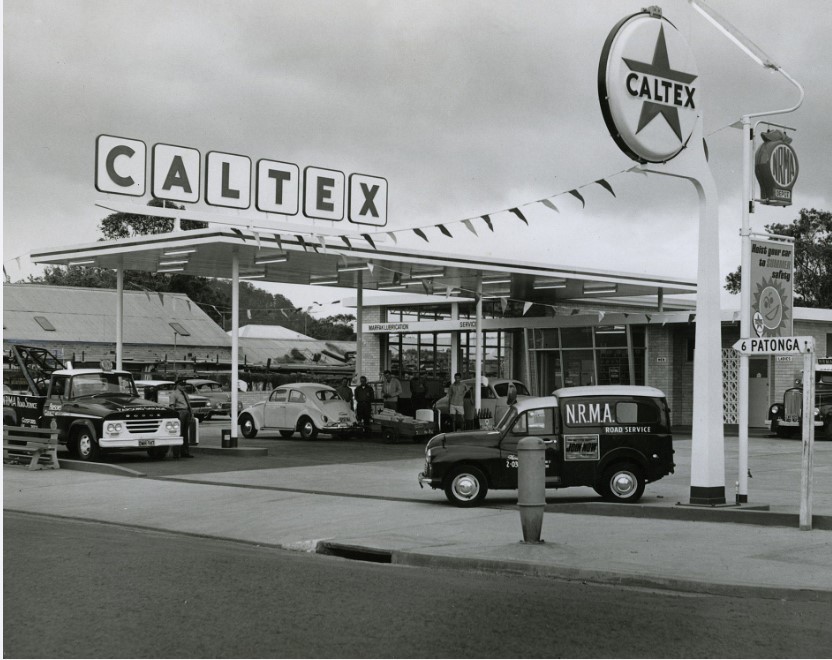 The Commonwealth Oil Refinery [COR], a joint venture between the federal government and the Anglo-Persian Oil Company, launched in 1920.

US company Atlantic Refining Company entered the market in 1924 as COR opened its first refinery in Victoria.

The Pacific Oil Company, founded in 1932, merged with Alba Petroleum in 1933. The Australian Motorists Petrol Company Limited [Ampol] was established in 1936. By 1945, Ampol swallowed Pacific and Alba.

The Caltex Group acquired the Texas Company in 1939, while Vacuum first used the red Pegasus logo for the first time. The company was later known as Mobil Oil Australia.

Caption: A surrealist TV ad for Amoco from 1975.

An Esso TV advertisement from 1985.

Stanley, a recurring character in Golden Fleece advertisements in the 1960s, had this groovy servo encounter in 1969.

Ampol sold its friendly service in the 1980s.

Coles and Woolworths arrived in the early 2000s, with Coles re-branding Shell as Coles Express.

Chevron, an American company with shares in Caltex Australia, sold its Australian business. A licensing agreement for retail use of the Caltex name here expired in 2018, forcing Caltex Australia to re-brand as Ampol.

Chevron, now back in the Australian market, will soon rebrand its Puma outlets as Caltex.

“As a society, we have seen a significant change from summer holidays in the family car when you’d be sitting in the back seat wanting to stop somewhere and have a hot meal at a roadhouse. Service stations were a fond part of the furniture,” he said.

“The roadhouses, particularly the Golden Fleece food stops, had restaurants where you could buy a hamburger with real beetroot and good hot chips. For a lot of people, it brings back memories,” he said. 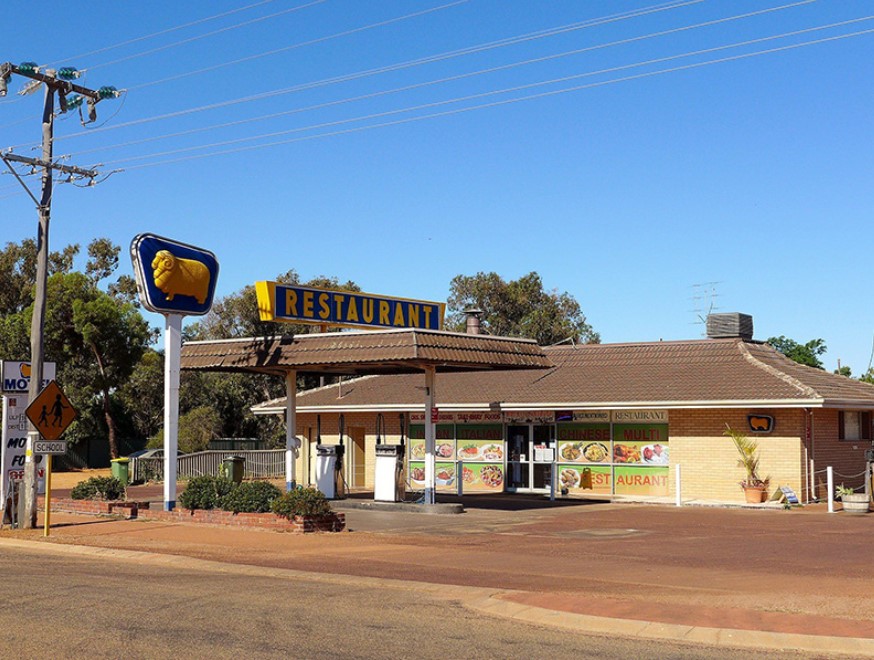 “It’s sought after because people remember the brands from their childhood,” he said.

“Enamel signs, petrol pumps, oil bottles and tins – the rarer the item is, the more they’re increasing in value.”

Mergers and acquisitions, and the changing nature of servos themselves, forced many closures.

About 80% of a modern service station’s revenue and 60% of its profit comes from fuel sales, with the remaining 20% of revenue and 40% of profit from retail sales. Non-fuel retail is adapting to changing social trends, Mr McKenzie said.

“We’re seeing a greater investment in small-format retail – things like groceries. We’re seeing barista-style cafes and on-site bakeries. Some are becoming the modern equivalent of a corner store, particularly in regional areas where people are shopping online but looking to top up. We’re starting to ride the wave of top-up shopping,” he said. 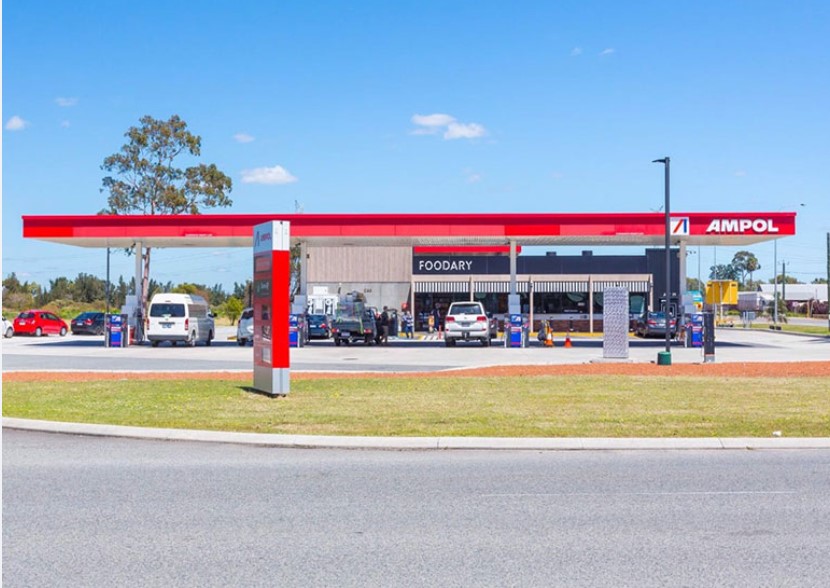 She said the reduction in petrol stations make them even more enticing for investors.

“Regardless of what brand of service station tenants, they are an essential retail service. They provide good, stable income. They’re quite appealing for investors,” Ms Flaherty said.

“There is less for investors to worry about because there’s always a steady stream of demand. In metropolitan areas, fewer service stations make the remaining ones more successful because they have a larger customer pool.” 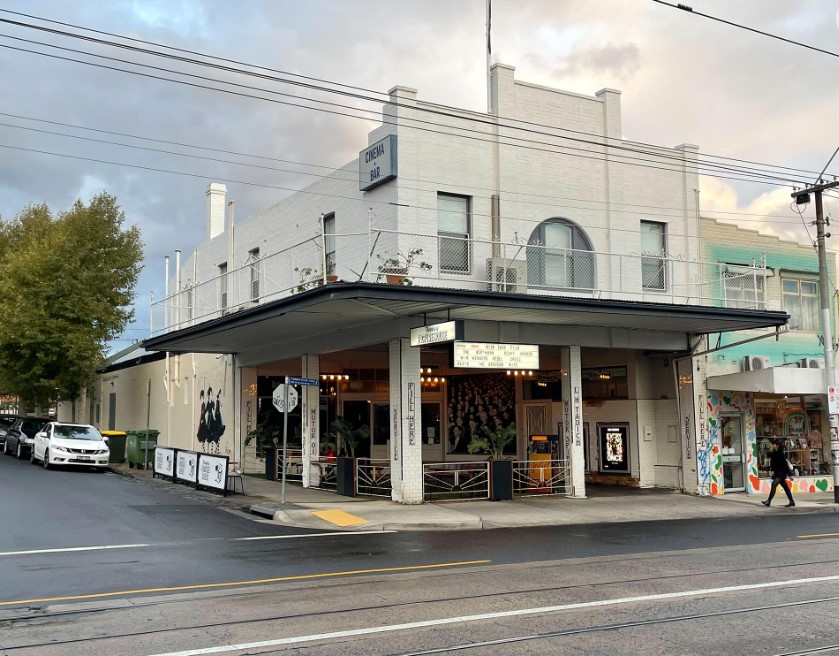 This service station and repair garage in Thornbury, Victoria, closed in recent years but has been converted into a cinema with many of the trappings of its former life. Pictures: Jamie Duncan

“Those that are located on major roads or near transport networks are prime candidates for re-development,” she said. 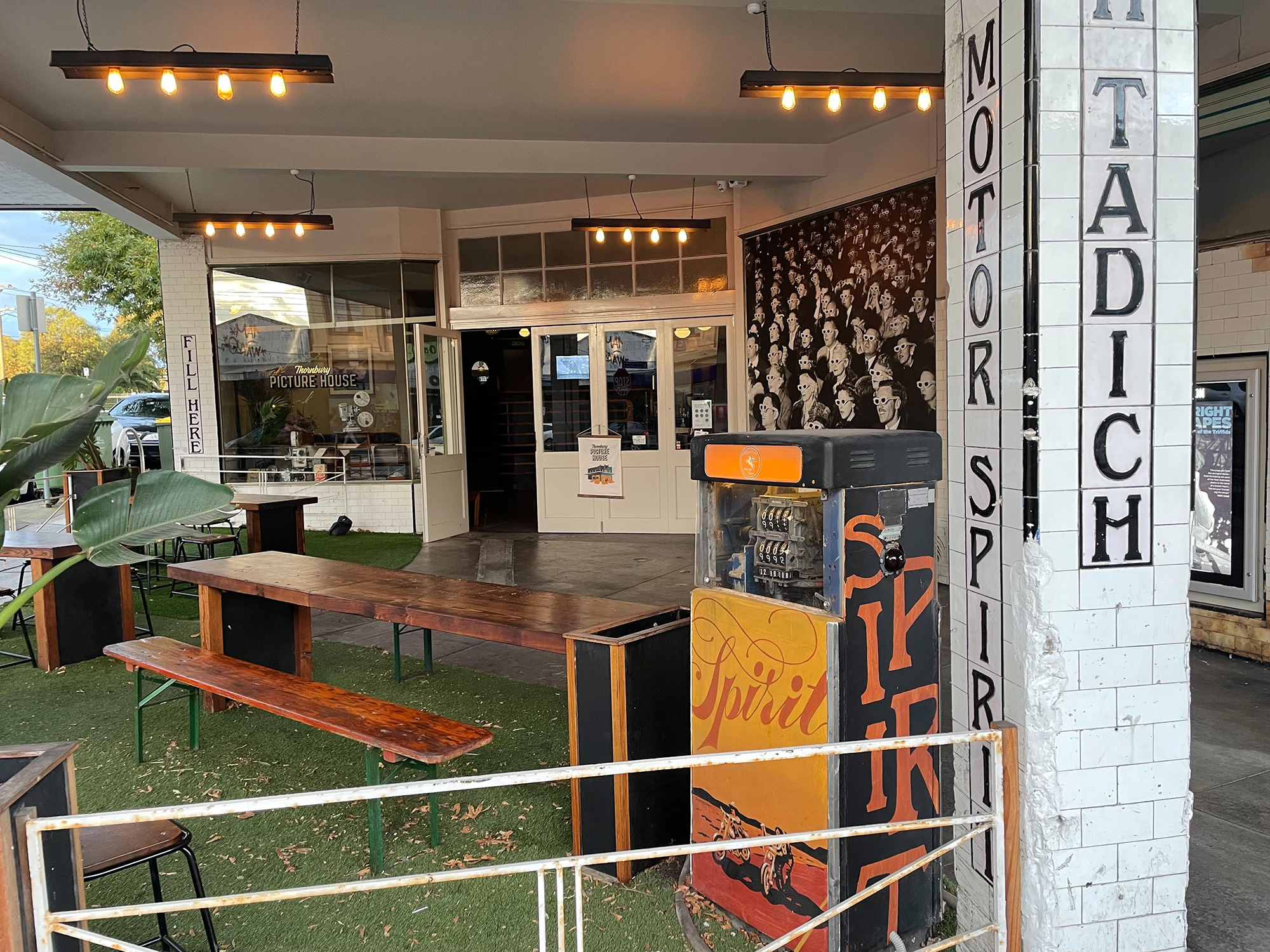 The outside of this cinema still has fill up signs and a vending machine, highlighting its past life as a service station and repair garage in Thornbury. Pictures: Jamie Duncan

Closures also made space for standalone mechanical and other vehicle services and, particularly in regional areas, for cafes, art and craft shops or general stores, Mr McKenzie said. 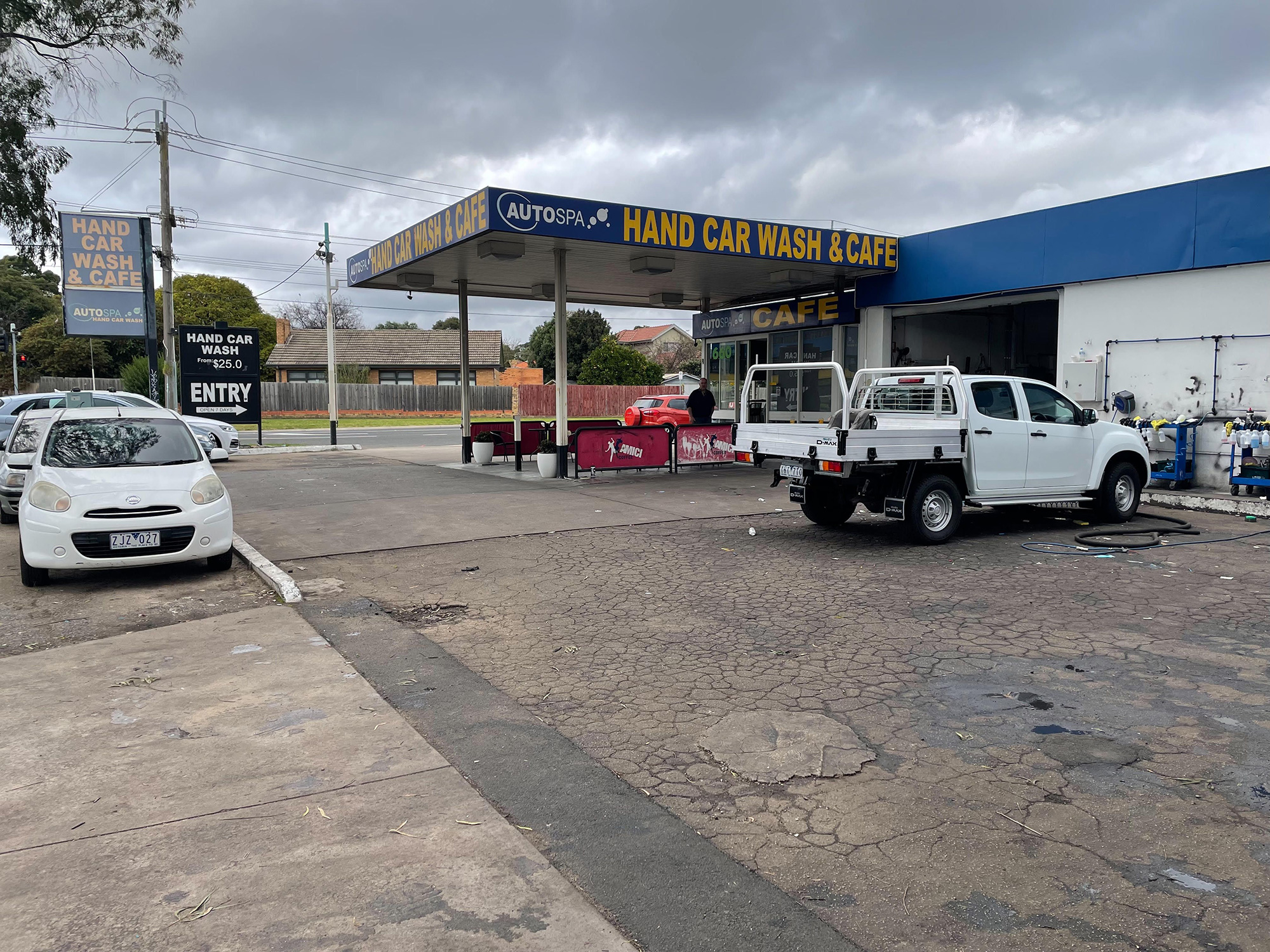 The future of petrol stations in Australia

“The switch to electric vehicles [EVs] could be seen as a headwind, but in the short-to-medium term I don’t think that poses a threat,” she said.

Australia’s EV take-up is slow, she said, while the Ukraine war and sanctions on Russia were disrupting supplies of minerals exclusively from Russia that are crucial for EV manufacture.

Mr McKenzie said those who dismiss petrol stations as “a Kodak moment in history” ignore the industry’s adaptability.

“In the next 15 to 20 years you’ll see service stations providing electricity and conventional fuels, which will still be significant in the vehicle fleet, and hydrogen for some commercial vehicles,” he said.

The future may lie beyond fuel sales, Mr McKenzie said.

“It could be micro-logistics. One of the big challenges for business is the cost of getting goods that last mile. We have 7000 sites located strategically around Australia. We’re perfectly poised.

“And service stations have a role in disaster relief. We’re the last to close when a town is engulfed by fire or flood and the first to open because we support emergency vehicles. We have [done] that in the past three years.

“There will be people in that younger generation who will identify the role we play in helping communities recover. Those times might be etched in their memories.”

What you still want to know about petrol brands & petrol stations

Why have some petrol brands like Golden Fleece, Solo, Amoco, Neptune and Atlantic disappeared over the years?

Australia’s fuel market has been marked by acquisitions and mergers over the years.

In some cases, the company that buys out smaller competitors closes the brand and re-brands its service station.

Why is petrol station memorabilia popular?

Some collectors buy service station memorabilia because they feel an attachment to brands because of experiences in their youth such as motoring holidays.

Others seek a commercial return on investment in memorabilia.

Petrol stations are an essential service and deliver strong, reliable returns for investors. The reduction in the number of service stations in recent decades has only solidified the financial stability of those that remain.

Extracted in full from: Tanks for the memories: how old Aussie petrol brands faded (realcommercial.com.au)