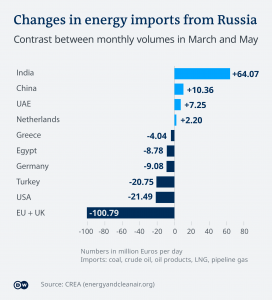 To claim: ” […] India, taking advantage of the moment and knowing the sanctions, is buying oil from Russia at a 40% discount,” Twitter user Igor Fedorovsky wrote in Russian.

Since Russia’s invasion of Ukraine on February 24, Indian refiners have increased their imports of crude oil from Russia. According to the Finland-based Center for Energy and Clean Air Research (CREA), imports have risen sharply since the start of the Russian invasion. According to the report, India’s share of Russian crude oil exports increased from 1% to 18% in May. Other suppliers, notably from Saudi Arabia and Iraq, have been replaced.

Discounts on Russian crude oil are only one reason for the increase in imports – the growing demand for energy on the subcontinent is another. Current domestic demand will rise from 4.7 million barrels a day to 5.15 million barrels next year, according to OPEC estimates. In 2020, India produced just 0.77 million barrels of oil per day, according to British Petrol BP’s “Statistical Review of World Energy 2021”.

According to BP, India is already the world’s third largest energy consumer. Oil demand in India is expected to double to about 11 million barrels per day by 2045, according to the India Brand Equity Foundation (IBEF), which operates under the Indian government.

Are oil exports to Europe lucrative for India?

To claim: ” […] India refines Russian oil and sells the end product to the US and EU. Really, this is capitalism at its best (sic),” wrote Dominik Lehmann, a member of Germany’s Left Party.

It is true that India has recently massively increased its oil imports as well as its oil exports. According to the Indian Ministry of Commerce, these totaled 15.99 billion dollars (15.12 billion euros) in April and May 2022. Over the same period in 2021, the amount totaled 8.94 billion dollars.

This leads CREA to conclude that Russian crude oil is processed in India. International energy consultancy Rystad Energy agrees with this assessment in a June 20 analysis: “The expectation that Russian crude would cease to be traded on international markets has not materialized, and at Instead, the steep discount on Russian crude has seen ships redirected to alternative markets. While the cost of funding these vessels and trades has increased dramatically due to the freezing of the Western financial system, the discount on the Urals is too attractive for some refiners to ignore. As with Iranian oil in the past, once Russian crude is refined, it will become nearly impossible to distinguish between these barrels and others as they re-enter the international market,” writes Rystad Energy. 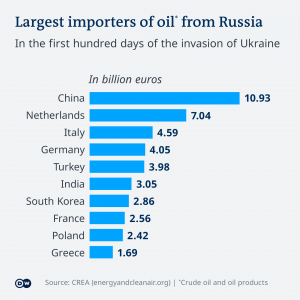 Statistics from the Indian Ministry of Commerce also show a change in trade routes, with oil exports of around $1 billion to the EU in April this year, compared to Indian petroleum product exports of $287 million. euros in April 2021.

It remains to be seen how lucrative mineral oil exports really are for India. Discounts on the purchase of Russian crude oil and high oil prices on the world market are offset by the sharp increase in transport and freight insurance costs, according to the CREA report.

Is India undermining the oil embargo against Russia?

Claim: “Asian countries are buying Russian oil at a discount, undermining Western sanctions. India is no friend of democracy, it seems,” writes Alan Sked, professor emeritus of history international at the London School of Economics (LSE).

There is no ban that would prohibit India from trading commodities with Russian oil. Only the United States, Canada and Australia have a complete embargo on Russian oil, gas and coal.

The EU and the UK decided on June 3 to toughen sanctions against Russia, with many exceptions. They settle only gradually.

Britain has determined a transitional phase for the ban on imports of Russian petroleum products until the end of the year. In the EU, coal imports are prohibited from August and oil imports by ship from December. Deliveries of oil and gas by pipeline are excluded from penalties.

Many Western oil companies signed additional supply contracts before the start of the embargo in order to take advantage of Russian crude oil price discounts. European shipping companies also benefit from the longer and more complicated trade routes necessitated by the embargo.

According to the CREA center, 75% of Russian crude oil was transported to India and the Middle East by Greek tankers in April and May this year.

Conclusion: Whether India breaches the EU embargo against Russia will become clear at the earliest when it is in full force. Tracing the origin of petroleum products, however, will remain difficult, says Rystad Energy Vice President Wei Cheong Ho: “Tracking what happens to Russian crude will be a challenge – Europe may end up importing gasoline, diesel and other products from India that are mixed with the Russian Urals.”