Public billboards and screens in convenience stores across Taiwan were hacked to display anti-Nancy Pelosi statements in response to the US House Speaker’s visit on Tuesday.

The “unprecedented” cyber attack came after Beijing warned “forceful measures” would be taken if Ms Pelosi went ahead with the visit.

China has since begun a series of live-fire military drills in six areas ringing Taiwan that China’s state broadcaster CCTV said would continue until Sunday.

Among the public screens hacked was an electronic billboard at Xin Zuoying station in the island’s third-largest city of Kaohsiung which read:

“The old witch’s ill-intended visit to Taiwan is a serious provocation to the sovereignty of the Motherland … Greater China will ultimately be unified!”

Screens at multiple 7-Eleven stores were also hacked with messages such as: “Nancy Pelosi, you warmonger, get out of Taiwan!”

Taiwan Railway and Uni-President — the company responsible for running 7-Eleven in Taiwan — both said the interruptions were from an “external” disturbance and network.

The railway company and 7-Eleven said they turned off or unplugged their screens until the issue was resolved. 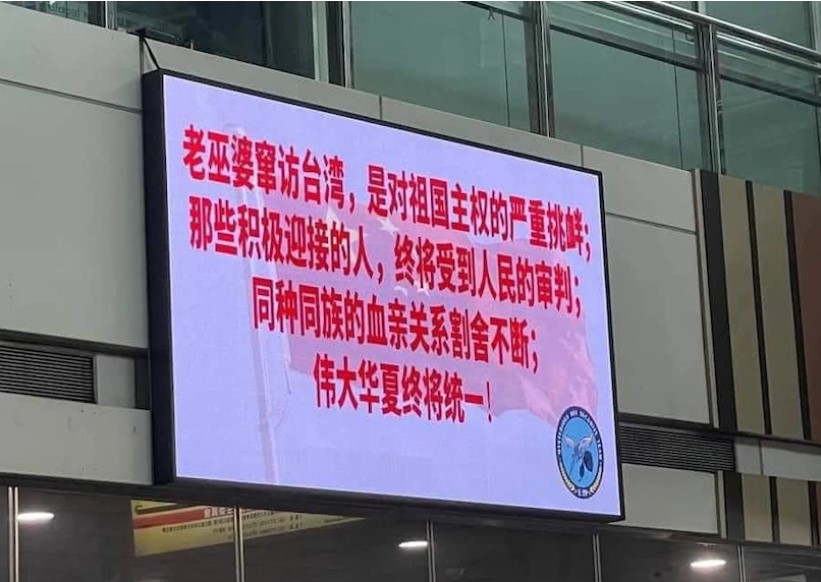 Wang Hao-yu, a 32-year-old businessman from Kaohsiung, is believed to be the first person to have shared photos of the hacked billboards online.

“The whole scene was just incredible,” he told the ABC.

The former legislature member for Taoyuan City said dozens of people from across Taiwan sent him photos of hacked billboards.

“There were so many messages showing the same scene across Taiwan,” he said.

“The content is clearly intimidating Taiwanese people,” he said.

“It is very disappointing that China is using this way to spread its propaganda here.”

She described the cyber attacks as an “unprecedented” experience for Taiwanese people.

“It happened during morning peak hours when many people purchase breakfast or coffee at 7-Eleven stores,” Huang told the ABC.

“From northern Taiwan to southern Taiwan, the displays of so many stores were hacked at the same time.

“It was quite shocking.”

Ms Huang said the hacking activities appeared to require relevantly low-level technical ability, but it showed the intention of hackers was “malicious”.

“You feel nothing when you hear the president’s website is hacked, but you feel shocked when you read the brutal words on the screen near you,” she said.

It was clear China’s civilian hacker groups were responsible, because some of the messages also included their logos on the billboards, she said.

However, she said it was unclear whether the hackers were backed by the Chinese government.

“The positive side is that it exposed China’s ambition in front of Taiwanese people,” she said.

“It tells Taiwan to strengthen its future preparedness.”

Taiwan’s presidential office website briefly went down after being targeted by a distributed denial of service (DDoS) attack on Tuesday.

In a statement, the foreign ministry said both websites had been hit with up to 8.5 million traffic requests a minute from a “large number of IPs from China, Russia and other places”.

DDoS attacks work by directing high volumes of internet traffic towards targeted servers in a relatively unsophisticated bid by so-called “hacktivists” to knock them offline.