Petrol prices are going down, but diesel remains sky-high. It’s hurting all of us

Diesel has sustained incredibly high prices for months and, whether you drive with diesel or not, it has been taking a toll on your bills.

Unlike falling petrol prices, diesel is more reflective of the global market and uninhibited by domestic price cycles – but experts say there is a massive gap between wholesale and retail prices that could take weeks to close.

Diesel prices reached a record high in June after oil companies raised prices to make up for recent losses.

Those wholesale prices have since gone down, but prices at the pump are not yet reflecting that – the gap is currently 20c.

“Wholesale prices for diesel fell dramatically in the recent weeks but unfortunately fuel companies are not passing these savings on to motorists,” RACQ spokesperson Nicky Haydon told 7NEWS.

“Diesel drivers are being charged between 50c and 60c per litre more than regular unleaded.”

One landscaper who is now spending $200 to fill up his ute told 7NEWS: “It’s a big cut in the weekly wage.”

It is not just drivers of diesel cars – the wider economy if affected because much of our transport, farming and industries use die.

“Australians have been paying record high prices … for almost two months and that needs to change, particularly because our economy is so heavily impacted,” National Roads and Motorists’ Association (NRMA) head of media Peter Khoury told 7NEWS.com.au.

“So much of our economy is run on diesel … cost of living is so heavily impacted by diesel prices.”

Why are diesel prices high if petrol is falling?

Diesel prices have been at a record high for months now, despite the rise and fall of petrol prices.

The price of petrol fluctuates in Australia in part because of price cycles, but that is not the case for diesel.

“Petrol is falling because of the price cycle but it will probably go back up,” Khoury told 7NEWS.com.au.

“Diesel doesn’t fluctuate like petrol does in Australia – in the main capital cities of Australia we have price cycles for unleaded fuel but those price cycles don’t exist for diesel.

“So diesel tends to be more reflective of movements of oil prices.”

All of Australia’s diesel comes from overseas, mainly from Asia, and Khoury told 7NEWS.com.au: “We’re impacted by the global markets.”

“Diesel hit record high prices in June, the highest it got to was just under $2.40 on average, but at the same time the wholesale price was also at a record high,” he said.

“So the gap between the wholesale and retail price in June wasn’t as wide as it normally would be.”

Oil companies raised prices in July to make up for losses, Khoury says, expanding profit margins and widening that gap.

A long northern hemisphere winter, ongoing supply chain issues as the global economy began recovering from the pandemic, and Russia’s invasion of the Ukraine all contributed to the global price of oil.

When are they expected to drop?

Diesel prices are expected to drop gradually over the next couple of weeks, and are already on a gradual decrease since the record highs in June.

Diesel wholesale prices fell by about 40c per litre from late June to 27 July.

The wholesale price for diesel is now about $1.87, and the average retail price is currently $2.10 – having dropped about 18c in the past two weeks.

“We expect the prices to fall about a cent a day, until its well below $2 per litre,” Khoury said.

He says that should then continue to fall until “around the $1.90 mark”.

Even when wholesale prices drop, it takes time for that to be reflected at the bowser.

“Changes in wholesale prices significantly influence retail prices, but the changes can take time to flow through,” the ACCC said.

“This is largely because it is generally only when fuel is replenished at a retail site that the lower wholesale price is reflected in retail prices.”

These lags are longer in places where there is a slower turnover in fuel.

Between 30 June and 27 July 2022, the average retail diesel prices decreased between 24c and 11c in the five largest cities, 27c in Hobart, 5c in Darwin, and about 16c on average in regional locations.

What can be done to ease the pressure?

Filling up the tank during the cost of living crisis is a headache, but Khoury says: “There are always bargains to be found.”

“Be aware, do a bit of research before you fill up so you’re not just pulling up to the bowser,” he said.

He recommends accessing real-time fuel price information on state-based apps rather than filling up at the station closest to you.

You can access this information using FuelCheck in NSW, RAVC in Victoria, FuelWatch in Western Australia, MyFuel in the Northern Territory, FuelCheck in Tasmania, and a variety of apps and websites in Queensland and South Australia.

Because diesel prices are expected to keep dropping, Khoury also advises motorists to top up rather than fill up.

What are the larger economic impacts?

Even if you don’t drive a diesel car, the lingering high prices are taking a huge toll on the economy.

“So high diesel prices have an especially profound effect on our way of life and our cost of living.

“We’ve started to see that in the cost of groceries and pretty much everything, goods and services are going up, and we know from the quarterly CPI reports … fuel has been a major contributor.”

Fuel costs for Ozwide Freight, a service that delivers food and materials in Queensland, surged in just one month from $200,000 to $268,000.

“We pass on as much as we can, so the mums and dads are paying for it.” 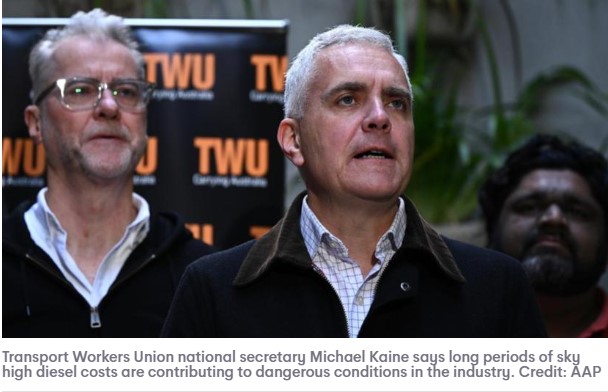 “When the balance is off and costs spike, the pressure is on to drive fatigued, skip breaks, delay maintenance and overload.

National Farmers Federation director Tony York told 7NEWS.com.au the industry has seen a “huge rise in input costs that farmers are having to face”, including the diesel which fuels the sector’s tractors.

Farmers have recently been planting crops such as wheat, canola, oat, and barley, and York says the sky high input costs will lead “to increases in the supply chain for products like those”.

Extracted in full from: Petrol prices are going down, but diesel remains sky-high. It’s hurting all of us | 7NEWS