Hysata — which says its ‘capillary-fed’ technology is a ‘step-change improvement over existing designs’ — attracts A$42.5m in Series A investment round

Australian start-up Hysata that says it has developed the world’s most efficient electrolyser has attracted A$42.5m ($29.4m) in an oversubscribed Series A funding round.

The money will be used to grow the company’s team and “develop a pilot manufacturing facility” for its innovative “capillary-fed” technology, which it says will be able to deliver the “world’s lowest-cost green hydrogen” due to its superior efficiency.

In simple terms, the largest element of the levelised cost of green hydrogen (LCOH) is the cost of the renewable electricity used, so the less power an electrolyser needs to produce each kilogram of H2, the lower the LCOH it would be.

“The Hysata electrolyser operates at 95% system efficiency (41.5 kWh/kg), delivering a giant leap in performance and cost over incumbent technologies, which typically operate at 75% or less [52.5kWh/kg],” the company says. The efficiency figure is a reference to the 39.4kWh (HHV) of energy contained in a kilogram of H2.

“This high efficiency, coupled with the simple approach to mass manufacturing and low supply chain risk puts the company on a path to delivering the world’s lowest cost green hydrogen.”

The company explains on its website that a green hydrogen project producing one million tonnes of H2 per year using 52.5kWh/kg electrolysers would require 14GW of wind and solar power at a world-class location. With the CFE, the same developers would only need 11GW of renewable energy — a cost saving of about $3bn (assuming an average capital cost for renewables of $1m per MW).

Hysata says the CFE offers “step-change improvement over existing designs”, not just in terms of the electrolyser stack, but also a simplified balance of plant (BOP) and modular manufacturing that is easy to automate and scale. 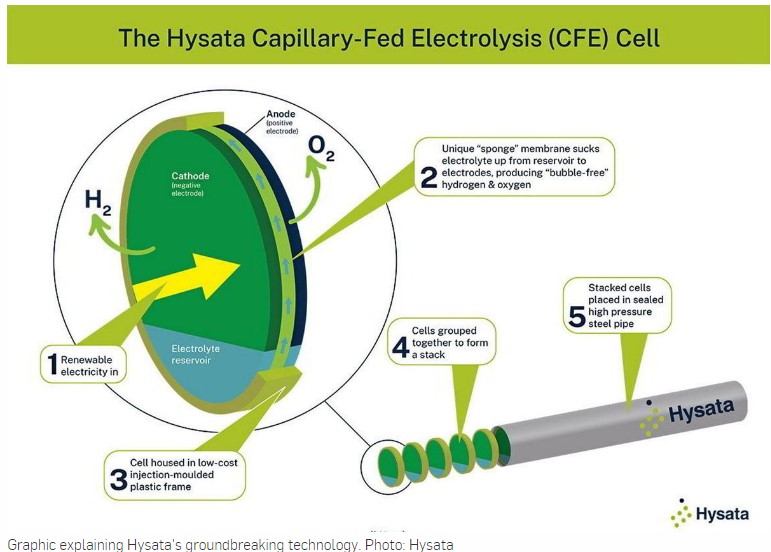 The electrolyser offers a “low-cost design, based on earth-abundant materials”, the company says — a reference to the high-cost iridium required in PEM electrolysers — while the “high cell efficiency eliminates the need for expensive cooling”.

The company plans to reach gigawatt-scale production in 2025.

“Having assessed scores of electrolyser technologies in my 20 years in cleantech, Hysata’s technology stands out as a true breakthrough,” said Kiko Ventures founding partner Robert Trezona.

“The company has redefined the core cell architecture for alkaline electrolysis, producing a practical and scalable solution with game changing efficiency. Hysata has the potential to be a globally significant company in the hydrogen economy and we look forward to supporting its growth, especially here in Europe.”

The view was echoed by CEFC boss Ian Learmouth.

“The CEFC is proud to continue our support for Hysata, which is set to be a major player in the global electrolyser industry,” he said.

Hysata CEO Paul Barrett added: “Over the last 12-18 months, Hysata has been interacting with dozens of major customers globally. The impact our efficiency and system simplicity delivers to customers’ project economics truly moves the needle.

“We look forward to continuing to work with our shareholders and customers to bring this much needed technology to market as soon as possible.”